Please enjoy this wild, cool excerpt from The Way Cities Feel To Us Now, read by the author Nathaniel Kennon Perkins. You can get this new book of short stories from Maudlin House.

Bad luck clung to you like a tick to the belly of a dog.

This started, as best you can remember, the moment that the road beneath your boots turned from dust to asphalt. The song you made up marks this moment in your memory.

You repeated the lines to yourself over and over so that you would not forget them. Later, when the sun was down and you were sitting along by your campfire in the mud on the chigger-infested bank of the Apalachicola River you started pick it out on your guitar, still feeling hopeful and romantic about the travels ahead. You sang, “where the dirt road ends/where the pavement begins/that’s where you’ll find me with a broken heart.” Then your low E string snapped and you swore.

From then on, from Chattahoochee to Albuquerque, it was one thing after another: wasp stings, dirty campsites, poison oak, blisters, cops, cops, cops. You took bad acid in Lincoln. Homebums stole your guitar outside of Oklahoma City. The only reason certain bad things didn’t happen to you is because worse ones did. This was the rule, and there was only one exception. Only once did it happen the other way around.

You had eaten nearly half of a Domino’s pizza and maybe four plates of salad from Food Not Bombs in Denver. Of course, it had all come out of a dumpster somewhere, but you didn’t mind. You were used to it. You ate out of dumpsters almost every day, and you had never gotten sick. Except for this time.

You were standing on a southbound I-25 onramp when your stomach told you that something was very wrong. The pain doubled you over, but you fought through it, and soon enough a white Chevy pickup truck pulled over. Amazed that you were actually getting a ride for once in your miserable life, you hopped in.

The driver was an ugly cowboy, three quarters drunk, his thin hair plastered to his pockmarked brow with sweat. A gray Stetson hat sat on the dash, facing forward so that you had to look out over it to see where the truck was headed, like it, this gross and archaic symbol of the old west’s backwardness, was now in charge of the journey and you were only following along wherever it led.

The stomach pains came back strong, but you gritted your teeth and they subsided as quickly as they had come on. You didn’t ask to be let out of the truck. The ugly cowboy was going all the way to Fort Garland, and you didn’t want to miss the opportunity. Lord knows chances like this had been too few and much too fucking far between.

You held it, and you felt proud of yourself.

Everything was going better than expected until about Castle Rock, when the ugly cowboy reached across and started caressing your thigh, and you could see his Wranglers pitching themselves into a horrible tent.

And suddenly, you did.

The stink rose like a cloud of mustard gas. The ugly cowboy gagged audibly and withdrew his claw.

The Chevy’s tires kicked up gravel and dust.

He left you standing on the shoulder, and you left him with upholstery so soiled that the windows steamed up.

But that was a far, far, away then, and this is right fucking now. And right fucking now you know your luck has shifted. You’re in Tucson, where you’ve spent the evening wandering up and down Fourth Street until stopping to listen to a busker: this beautiful rainbow oogle on a beat up mandolin.

And after a couple songs he takes your hand in his and leads you to a place he knows, an ink-dark corner of the parking lot behind the Green and Black Café.

That bad luck built up in you until there was no more room to hold it.

You are about to cast it from you like a broken curse.

You are going to purge.

You are going to shoot the bad luck out and into a pale puddle on the cracked and broken asphalt. 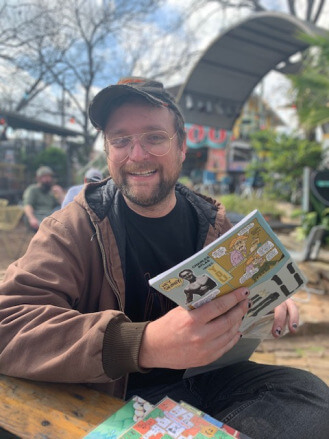 Nathaniel Kennon Perkins
Nathaniel Kennon Perkins lives in Boulder, CO, where he works as a bookseller. He is the author of the short story collection The Way Cities Feel to Us Now, the short novel Cactus, and the ongoing literary zine series Ultimate Gospel. His creative work has appeared in Triquarterly, High Country News, the Philadelphia Secret Admirer, Decomp, Timber Journal, and others. He runs Trident Press. nathanielkennonperkins.com