Sometimes music is enough. His father’s massive 1970s headphones with the auxiliary jack that only fits the turntable left behind when he disappeared a decade ago. He drags it with its oversized speakers into his room, scratches the floor, catches hell from his mother, but now he can lie in bed with the headphones carving pressure lines into his acne-sore skin and the music a physical force that swells and shoves out everything. It is difficult to find what he wants in record format for the turntable, Soundgarden, Smashing Pumpkins, Nine Inch Nails, Metallica, but he is too poor to buy a yellow Walkman C.D. player with the folding earphones like everyone has, not to mention C.D.s to play on it – one more difference, one more arms-length away from everyone. So he sends off for records using lawn-mowing money and sets them spinning on the turntable and the beautiful din of it pounds through him until it becomes everything.

Sometimes crying is enough. He weeps in the shower with the slowly cooling water breaking over his back, on his hands and knees, vomiting up hard sharp barks of sound that stretch and tear his throat like birth. His knees bruise against the bare tub, his body weak and bony, ribcage heaving like a dying dog. He feels it: his ugliness. And it helps. It drags the sobbing from the pit of him, from the deepest place where there is rot and disease and agony, and he retches it up with his eyes squeezed shut and his hair hanging down into the scummy drain until it becomes everything.

Sometimes masturbating is enough. He achieves focus so intense that he actually hears a girl’s fevered gasp and his eyes snap open, but there is just the pebbled ceiling and dirty glass light fixture. He is alone like always. He sinks back into it. Tits against his chest. Fingers inching between his balls and the jumping flesh of his thigh. Tongue and hot mouth on his ear, fuck me please God fuck me harder. All of which he knows he will never have. They recoil from him in the lunch line, laugh mean and cackling when he’s called on in class but can’t make his voice work, when he embarrasses himself in gym. His skinny legs hairless in the dress-out shorts. But behind his eyelids they strip willingly, backs arched and thumbs hooked through the string sides of panties like the ones he saw when the cheerleaders hung that girl’s clothes on the flagpole for screwing someone’s boyfriend. They writhe and spread and sob his name, their fierce hands raking back his hair and he in firm control on top, and he gets that throb of strength like he could go forever and works himself raw until it becomes everything.

Sometimes hurting animals is enough. A neighborhood cat, a stray dog too sick to escape, one of the baby rabbits clustered panting in a too-small cage on the neighbor’s porch. He grips them by the back of the neck and clamps the body between his knees and finds the ribcage with his thumb. Then slowly, slowly, he sinks a needle between the ribs and watches the animal go blank and frantic as pain spreads like a stain. His breath quickens, his eyes flicker. He drinks down their panic and adrenaline, working the needle and snapping bone and touching flame to the delicate rim of ear and they scream like babies until it becomes everything.

Sometimes standing above his mother while she sleeps is enough. He holds against his bare stomach a kitchen knife or the rifle his father left behind or the old semi-automatic he stole from the garage of the crippled man whose lawn he mows for wrinkled five dollar bills. The power of the weapon swarms like bees under his skin, unfurls as potent and delirious as anesthesia. He can see her insides and her outsides superimposed, a vibrating double negative. Kissing his temple at birthday parties no one came to. Slopping milk into his cereal with a careless hand. Smoking and kneading her forehead between teachers at parent conferences. Her throat sliced open wide and flat like a puppet mouth. Her sagging sleep shirt soaked a dense red-black. The back of her head blown to a wet cave edged with hair grey at the roots. He smells gun oil, copper blood, dollar store Mother’s Day lavender powder, nicotine, unwashed sheets, Hawaiian breeze Glade plug-in, urine. He sees her standing and sleeping, living and slaughtered, a hypnotic cyclical vision that revolves inside him until it becomes everything.

Sometimes just circling the building is enough. Black hoodie, jeans dotted with animal blood no one bothers to notice, black baseball cap backwards to keep his hair off his sweaty face. These are the days when he feels with deep certainty that at last he will do it. He steals his mother’s car from outside her work and creeps school-zone slow through the neighborhood, heart exploding, blinking and breathing with horrible self-awareness, his head groggy and strange like he’s been dredged from a coma. In his mind, vivid as a sleepwalking hallucination, he is already living it: the slick tap of bullets sliding into place and the solid impact punching him back and the noise mushrooming until it implodes into a percussive black silence. People falling, jerking, screaming like the animals he clamps between his legs. He circles. Red brick, flagpole, dying flower beds, rows of sleeping cars, a college flyer taped crookedly in a window fading under relentless sunlight. Placid outside but inside teeming with misery, an unhealthy hive. One hand on the wheel, one on the cold metal tucked out of sight on the passenger seat like a fugitive. It warms to his touch. He fingers and fondles, tests his grip, strokes the length like the bodies of those imaginary girls, circling, circling, circling, until it becomes everything.

Sometimes this is enough. Until it isn’t. 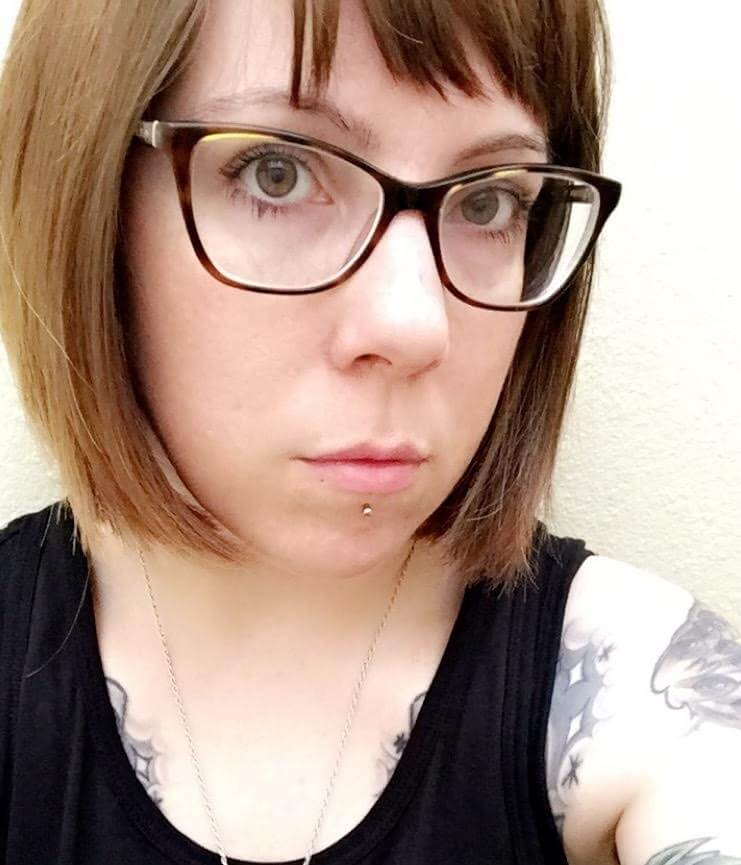 Chelsea Laine Wells
Chelsea Laine Wells has appeared in Flapperhouse, Paper Darts, Little Fiction, Black Candies, Hobart, New South, The Collapsar, PANK, The Other Stories, and Heavy Feather, among others. She’s been nominated for multiple Pushcarts and Best of the Nets and won a 2015 Best of the Net. Chelsea lives in the Oak Cliff area of Dallas, Texas with her beloved, Bryan Lindsey, and their blended family of four children and two old cats. She works as a public high school creative writing and reading teacher and is also managing and fiction editor for Hypertext Magazine. Her work is represented by Maria Massie of Massie and McQuilken.