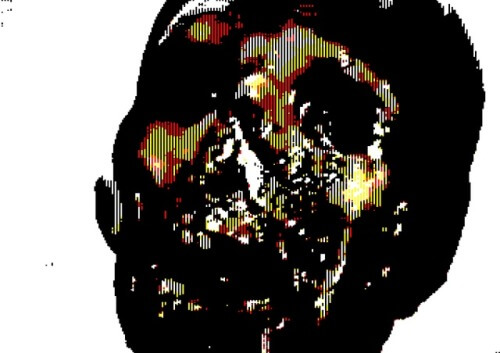 Halloween really went to hell for the Davis family. It’s a shame, too. My twin brother Jasper and I were big fans. Though Mom, she was Halloween’s big­gest advo­cate, always doing that extra something, which was nice since most of the mothers whose kids went to our school—the moms who dressed up like righteous, Bible-pushing Christians year round—wouldn’t go through half the trouble she did.

See, after Dad had died, Mom worked as a seam­stress. Decorative statements were her passion, espe­cially during Halloween, and she’d spend hours meticulously handcraft­ing many of our ghoulish knick-knacks. In fact, she even tailored costumes for us.

The costume that stands out most, for me, was a near-replica Ghostbusters jumpsuit she’d made when I was six. (That same year she constructed a He-Man “chest-plate” for Jasper out of cloth and suspenders, which, compared to my sweet ghost-busting outfit, was pretty disappointing.)

As for decorations, Mr. Scary—a scarecrow mom had assembled out of wool, straw, and black garbage bags when Jasper and I were thirteen—was definitely the pinnacle of her efforts.

The life-sized effigy, which hung from the lamppost in front of our house, looked so menacing that Jasper and I would watch from the safety of our kitchen win­dow as peo­ple approaching our house either crossed the street or turned the other way entirely. (Heck, Jasper and I were so unsure about it our­selves that we some­times did the same, which was basically how the name “Mr. Scary” started.)

Sadly, about a week into Mr. Scary’s dominance over the neighbor­hood, the phone rang. It rang, if I recall, while Jasper and I were in the living room watching The Night­mare Before Christmas. Mom answered, and I could tell from the concern in her voice that something was amiss.

Jeanne was the sixty-two-year-old widow who lived next door. She always brought us cakes and brownies, and was very nice.

Mom hung up the phone.

“How was Jeanne’s Tahiti trip?” I asked, hoping the answer wouldn’t be a bad one.

Mom stood there awhile, biting her thumbnail and gaz­ing at the floor as though my question had fallen into the carpet and was lost for­ever. Finally she looked at us and said, “Devon, Jasper—I want you two to go outside and take down Mr. Scary.”

We of course tried reasoning with her, yet no ifs, ands or buts were about it. So down came Mr. Scary.

“What now?” Jasper asked, sadly draping his limp car­cass along our oil-stained driveway.

This was too much. Still, Mom wanted it done, and who were we to argue? So Jasper and I went ahead and disem­boweled poor Mr. Scary, who, in the short time he was with us, had become, we felt, an illegitimate family member—something to fill the empty space Dad’s passing had left us with.

Later that night, at dinner, Jasper asked Mom if we could pray for Mr. Scary.

“If anyone deserves prayer,” she said, “it’s Jeanne. So let’s pray.”

We clasped our hands, closed our eyes, bowed our hands, and prayed for Jeanne. And once Jeanne was prayed for, we ate in silence until Mom spoke up again.

“Remember Jeanne’s son?” she asked. “The one in Heaven? We went to the funeral, remember?”

Jasper and I nodded into our plates. We remem­bered.

“Well, Jeanne didn’t like Mr. Scary,” Mom said. “In fact, the moment she saw him she burst into tears and locked herself in her house. She didn’t eat or sleep for two whole days.”

I didn’t. I shrugged at Mom’s question.

Apparently, Jeanne told Mom that Mr. Scary reminded her of her son—or at least the body of her son—when he was found hanging inside her walk-in closet, dead from suicide, two years before.

Jasper’s face went pale as Mom explained this to us. (I couldn’t tell if mine had or not, but my mouth sud­denly felt as though I’d eaten chalk.)

Afterward, Mom told us to run upstairs and make Jeanne a get-well card, which we of course did. Only, she never received it—Jeanne, that following morning, would drop dead of a heart attack.

Halloween just wasn’t the same after the Mr. Scary inci­dent. It had become more obligatory than festive—a regression of interest that culminated the year our luck had really soured, once Jasper and I started high school.

See, after Mom had lost her job because of drinking, we moved in with Grandpa, who lived in Paradise Acre, a sen­ior citizens community where people, when it came to Halloween (and almost everything else), were even less spirited than we were, which was fully real­ized when nobody on our block had or was going to be cobwebbing their home. This, to us, regardless of our slight aversion towards Halloween, was taboo, and it sent Mom spiraling into an existential tizzy.

Jasper and I, arriving home from school one day, saw her tearing down all the decorations the three us (Grandpa wouldn’t help) had put up in our yard.

“Mom,” I said, “what are you—put down the—don’t smash Dracula’s spooky light-up castle, anything but that!”

Mom looked at me and said, “Jesus Christ, Devon, what’s the point? We’re the only ones who give a shit, god­damn it!”

It was the first time Jasper and I had ever heard Mom use the Lord’s name in vain, let alone cuss—though, I’ll admit, it was pretty impressive the way she’d managed both in one fell swoop.

“What do you expect?” I said. “These Paradise Acre people are, like, ninety-seven years old.”

“That’s true,” said Jasper, “they’re already, like, walking Halloween decorations. You’ve seen them. They stumble around like zombies. Except most of them don’t have any teeth, so they can’t bite.”

“Screw ’em!” Mom hurled a plastic jack-o-lantern at a passing car. “We probably won’t even have trick-or-treaters this year!”

I knew she was right about that.

Then Grandpa came out into the yard. “What’s the commotion?” he said.

Mom looked at him very seriously and said, “Go back in the house, Dad.”

When Grandpa refused, Mom walloped him with the broomstick that belonged to our “witch” decora­tion.

“Why, you rotten—” Grandpa turned and waddled back inside the house. “You guys are nuts,” is what he mumbled on the way there.

I wanted to follow him. I figured it was safer in the house, less crazy. Donahue was on.

“Well?” Mom handed Jasper a jack-o-lantern. “You two gonna help me, or what?”

Jasper brought his arm back and lobbed that orange son of a gun as far as it would go. I didn’t have the heart for such violence, so I neatly folded our card­board skeleton in half and placed it under my arm.

Mom really said this to me. She even scowled when she said it.

I turned to Jasper, and figured we both were think­ing the same thing—whether or not Christmas in the Davis family would suffer a similar fate.

Then a wooden tombstone flew towards me, and though my mind was elsewhere—the hanging of Jeanne’s son; the gutting of Mr. Scary; the buried bones of my father; the questionable mentality of my mother; the failing of Halloween, and the impossibility of Christmas—I still had good enough sense to duck.

Check out Brian Alan Ellis’s new audiobook SOMETHING TO DO WITH SELF HATE, narrated by Mary Moore 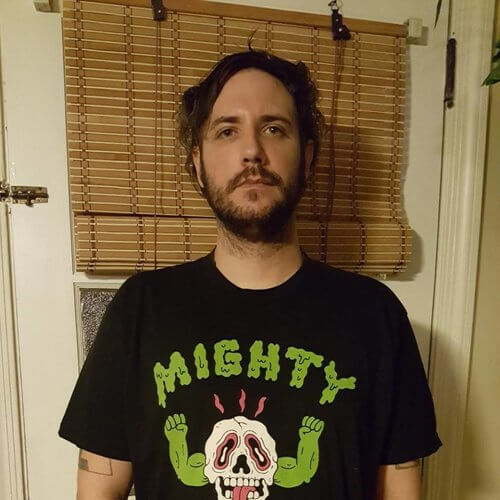 Brian Alan Ellis
BRIAN ALAN ELLIS is the author of three novellas, three short-story collections, a book of humorous non-fiction, and Some­thing to Do with Self-Hate, a novel. His writing has appeared at Juked, Hobart, Monkeybicycle, Elec­tric Literature, Vol. 1 Brook­lyn, Queen Mob’s Tea House, and Funhouse, among other places. He lives in Florida.