People were rushing all around Victoria Station as I hurriedly checked for the public wifi that Google had assured me a month ago would exist. I probably put too much trust in Google but it didn’t fail me that time since I soon was mooching off of Lush’s wifi connection. I had never been to London before, nor had I been to the United Kingdom before, or even Europe for that matter. I did know a girl who lived in Tottenham though and I had known her for nearly seven years. We had met on Tumblr, back when Tumblr wasn’t really known for anything more than pictures of cats and as a hotbed for fandoms. I can’t really recall how we found each other of all the millions of people on the website nor can I really recall at what point we went from being “someone I follow online and sometimes talk to” to “this is my friend who I care for deeply”. Maybe it was the moment I saw her laughing as she came to pick me up, with my giant suitcase with its broken wheel. Seven years of knowing her experiences and her feelings, her knowing mine, yet finally putting a physical presence to a screen. I stayed in the sharehouse her girlfriend and her lived in with their friends for a few days of my visit. Experiences like this feel so unique and surreal as they’re occurring yet I think they’re becoming more and more common. Relationships, both platonic and romantic, are evolving with the internet and technology. I can have best friends I have never met, people who create a fullness in my life, even if they lack a physical space in it. However, at what point do people cross the threshold?

Growing up, I remember sitting behind a computer screen often. Not that I didn’t go outside, I was a very active child. As I grew older though, the internet became a strange intrinsic part of my daily life. I would go on Myspace, send emails on AOL, and join all these other random sites such as Purevolume and Tumblr. It felt very natural to talk to people on these sites, even if from a very young age I was warned against talking to strangers. I met the girl I first acknowledged I had feelings for on Purevolume. Growing up in the very conservative and religious Oklahoma, there wasn’t much representation for queer (especially of a feminine sense) identities. I had no clue women could actually be attracted to women until I met Jenn. I still have a very clear memory of her profile picture, licking a lollipop, seeming very edgy. Her voice on the phone, hiding in my garage as we talked because I didn’t want my Mom to find out and ask questions. I was twelve and it wasn’t necessarily the fear of being discovered in the act of my own discovery, yet being caught talking to someone online who I didn’t actually “know”. This very formative fear eventually fell away as I became more and more entrenched with online interactions. I became the person who had friends everywhere yet I recognized the stigma attached to these friendships. They weren’t considered real. Even if I spent more time talking to them than I did the people who I saw every day, even if they knew the inner workings of my heart, they weren’t seen as legitimate to most people. In some ways, a lot of them aren’t. I have had many people on the internet who I interact with, who come into my life in a very intense sense and yet are out of it just as swiftly. Like a very heavy rainfall that seems it’ll last for a long time, but by the afternoon the sky has cleared. There’s evidence of puddles on the ground, but not much else.

There are others though that stick and our lives quickly entangle. I met probably one of the most intense loves of my adult life (so far, I’m only twenty-one) through a Facebook friend. Thinking on this, it feels very wild in retrospect. One moment I was talking to him on Facebook messenger in the bath, six months later I was in Australia drinking horrible ciders with him in his living room. I cannot refer to him as just a person from the internet because in a strange sense he has become a part of a life path I have walked. I don’t regret that but it was very real and it happened beyond just a person whose face I would often see on various kinds of screens. It doesn’t always work out so lovingly though. I’ll admit I have definitely put myself in harms way because of my habit of forming online friendships and romantic interests. I have become attached to people that have later turned out to be harmful in their own communities, people that if I had met them in person, I would have definitely been putting myself in a dangerous situation. Not that I would ever tell this to my Mother, a woman who would continually express concern every time I would get someone to buy me pizza online because I was having a bad day (thank you to every person who has ever done this, yes I still love large pizzas with cheese, green peppers, and pineapple, with garlic dipping sauce of course). Even now I’m aware I am more willing to trust and accept care from people I have never met, whose physical presence I cannot fathom, than those who in person have loved me and cared for me time and time again. It could be commitment issues, fear of entrapment, and possibly because there is a lack of reality to it. It’s easy to accept love from a void, just as it is easy to accept hatred. Without a physical space, it is easy to forget these are people with their own experiences, emotions, lives. That could be why cruelty online is so easy; how people with a funny look in a picture can become a meme, instead of an actual person. The thing is people are complex, they are more than black and white, they are more than a screen.

At what point a person chooses to recognize this, the apathy evolving to empathy, is something I’ve been thinking on lately. As a person who spends a good portion of my life interacting with strangers, both in person and online, the consistency of the URL existence appeals to me. Nurul is only a message away. My Mother is only a message away. Even though both of these people, simultaneously important to me, exist on different continents and have never met before. They are both at least two layovers away IRL at any given moment, there we find the inconsistency when you never have a permanent mailing address. I do have a permanent twitter URL (@erinisaway, in case you’re interested). I do have people I interact with every day on twitter and maybe, yeah I’m lonely and I don’t find shame in this loneliness, because we all are experiencing it too. Even in these lonely moments, when I am far away, I still have the fact Catrina picked me up from Victoria Station after knowing me for seven years, even if she had never seen me laugh before. I have the fact that I have friendships that have grown from a seed planted when I was twelve years old, alone and trying to escape my own circumstances online. It’s a unique experience we all are sharing right now, the ability to grow and love in a digital space that previous generations never really had. I don’t know about you, but I am thankful for it. 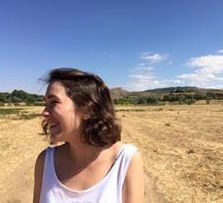 Erin Taylor is a Tulsa-based writer who is always somewhere else. She has a chapbook OOOO (Bottlecap 2016). Her writing can be found at erintaylor.tumblr.com and she is always available @erinisaway