Here we are together again. We’ve rented an Idyllwild cabin to celebrate the New Year. Everyone behaving normally. I coo at the new baby, Peek-a-boo. But he will not smile, only blink and twist his tiny mouth, unsure about me. I’m usually so good with babies, I tell his mother. He’s shy, she says.

My other girlfriends play with the baby easily. Someone has put on David Bowie’s Time Will Crawl. They take turns with the eleven-month-old—cooing and cuddling, laughing at how he toddles, how he drools and sputters and plays with his small wooden blocks.

I drink wine, I drink whiskey too. When we run out I send my husband down the mountain for more, and then take my laptop outside to the deck, happy to get away. I’m supposed to be finishing a rewrite for my editor. The novel I’ve been working on for almost four years. But it’s slow going. Writing is an act of excavation. To make them understand you must get each sentence right, each word. Then maybe something will change—although so far that hasn’t been the case. I’ve published several essays, and still you carry it around with you. The same anger, only louder now because for a moment it had an audience. I worry it will be the same with this book.

The snow-covered woods below turn yellow and then red, the moon comes up, the stars come out, the city illuminates the far western sky. My hands are pinched from the cold, but I keep them out of my pockets. One rests on the keyboard, the cursor blinking above it on the screen. My other grips the empty wine glass. I tell myself not so hard, it will break, maybe cut you. I look at my hands, which are monstrous in the twilight. The fingers elongated from the cold, the knuckles not very defined, the skin around them etched with deep grooves.

In elementary school, a classroom where there are still cubbies for belongings, show-and-tell every Friday, daily crafting projects—there exists a much younger version of me, drawing a man underwater. I do a trick I learned in a cartoon-drawing book. I draw an old timey scuba suit, a big round bubble for a head, like an upside down fish bowl. I draw a square on the front, only I bend the lines on the sides to make it look curved. Classmates crowd around, they ooh and ah, want me to do the same on their papers. The teacher tries to get control over the class, saying something about not all scuba divers needing to look the same—but it’s lost in the drum of the students, who are half-whining, half-chanting for me to replicate my drawing for them. The bell rings ending the moment, the little students rushing off to their cubbies to gather their backpacks and hats and coats. My scuba man floats in the blue sea I’ve colored around him. I add a little mark in the curved square—the sun glinting off his helmet. When I go to my cubby I watch my hands reach up for my jacket, and it’s like seeing them for the first time. This younger me looks at her hands, she thinks they are childlike and smooth but they are changing—and she suddenly understands a little about time, about growing up, and for the first time is excited to do it, because, standing in the commotion of class ending, looking at her hands, she’s thinking, One day they will do great things.

I refill my glass with the Dolcetto my husband has brought back from the store. My friends have started a fire, the baby is picking Cheerios off the carpet with delicate movements, his mother and my girlfriends sit on the couch. Come sit with us, they call. I shake my head. I’ve got this rewrite to do, I tell them.  I almost slam the sliding door shut. My hands are red from the sudden burst of warmth from having been inside. I pick up some of the hard frost on the balcony and melt it between my fingers. I don’t even pretend to open my laptop.

Younger me would be shocked to know just what these hands are capable of. Remember when they held that tiny paper cup? Scalloped, easily crushed. The pill it contained was surprisingly large, the size of a Mentos. The cramping, the blood. There was a mess to clean. Or those years you used your driver’s license to rack lines—how many cigarettes have you held between your pointer and middle finger? How many pill bottles have you opened, or faces you’ve held while drunk, their mouths tasting exactly the same? It doesn’t matter why you did those things—you did them, and no essay or book will scrub it clean.

What useless mitts you’ve turned out to be, I tell my hands.

Inside they’ve put on Dolly Parton, a slowed down version of Jolene. They laugh when I finally come in because my cheeks are bright red. How are you sweating? My husband says. It’s twenty-nine degrees out.  I shrug and smile because I can tell they are waiting for me to be fun. I put on Talking Heads, This Must Be the Place and dance with my friends. I try not to think of haunted female characters in books. Too late, a flood of them:

Anna from Jean Rhys’s Voyage in the Dark, who’s devastated after an abortion: “I was thinking, I’m nineteen and I’ve got to go on living and living.”

I twirl one of my girlfriends and laugh a big throaty laugh. See? I am playful and amusing.

Anais Nin’s fractured, guilt-ridden heroine from A Spy in the House of Love: “She must redesign the face, smooth the anxious brows, separate the crushed eyelashes, wash off the traces of a secret interior tears, accentuate the mouth as upon as canvas, so it will hold its luxuriant smile.”

Such quiet discontent. Womanhood is walking around with invisible clenched fists. I change the music from Talking Heads to Juanes, and we dance around the room, our hands over our heads, singing Cama cama come on baby te digo con disimulo tengo la camisa negra y debajo tengo el difunto.

“The hands forgot,” Olga from Elena Ferrante’s The Days of Abandonment tells us. Her affliction has manifested itself physically. “The fingers had no memory of the right grip, the correct pressure.”

Yes, I will help make dinner. Anything to keep these hands busy, to keep up the charade—ignore that inner ringing. I chop the vegetables and slice the bread for dipping. I heat the oil, mince the garlic, mash the tiny anchovies until their bodies have dissolved and my fingers are washed in fatty oils.

How is the writing going? One of them asks at dinner.

I can’t seem to get it right—I’m worried I won’t get it right. But the baby has knocked over his sippy cup, the lid was not on tight. Juice is soaking into the rug.

When we run out of wood I volunteer to cut some down. I take a small axe and outside I slash at a young tree. I slash and slash until I’ve broken a sweat and my shoulder burns but I’ve barely dented the trunk. My hands ache, snot is freezing on my face but if I could I’d snap this axe in two. There is that much left in me still. My husband comes out then. Why am I crying? Because I’m only thirty-two and I must go on living and living. Because of language’s limitations. Because I know female rage. Bury it deep enough and it compacts, shimmering and diamond-like, and sharp as a knife.

Liska Jacobs is also the author of the debut novel Catalina, November 2017 from MCD/FSG Originals, AND IN AUDIO FROM TALKING BOOK! 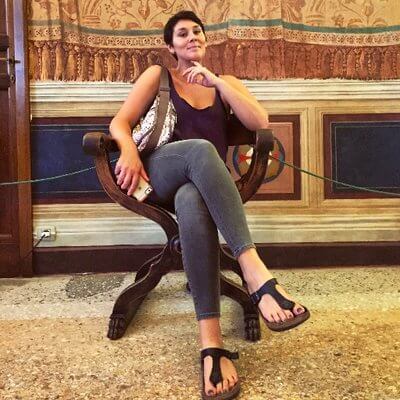 Liska Jacobs
Liska Jacobs holds an MFA from the University of California, Riverside. Her essays and short fiction have appeared in The Rumpus, Los Angeles Review of Books, Literary Hub, The Millions, and The Hairpin, among other publications. Catalina is her first novel.

This entry was posted in Featured, Non-fiction and tagged A Spy in the House of Love, Anais Nin, and sharp as a knife, Catalina, cubbies, Dolly Parton, Essay, Great Things, Jean Rhys, Liska Jacobs, Mentos, One day they will do great things, Peek-a-boo, projects, shimmering and diamond-like, This Must Be the Place. Bookmark the permalink.