Below is a reading from The Great American Suction by David Nutt. You can get this book right now at Tyrant Books, so do yourself a favor and go order right now. Thanks. Enjoy!

Shaker’s initial lapse into semi-sobriety came several years previous in a midsized arena strung with athletic association banners and patriotic bunting and beer sponsorship logos. He was keeping his head together at the time with a few protean substances stored in a sporty toolbox. The toolbox was clutched under his arm as he stood on the arena floor with his nostrils sticky, his skull bombed. Only six or seven other people were on the arena floor with him. The rest of the vast space was empty. The audience milled around in the emptiness, watching Shaker’s ex-wife writhe around on stage in an oversized cassock, lost in lumps of massive fabric. This was the first and only time Shaker had seen her since the divorce. She was chanting into an air traffic controller’s headset, babbling in tongues, dry humping the stage, her eyes rolled to the whites. The usual shamanic shtick. Her backing musicians, The Meek American Rapture, were mostly scabs and ringers in this incarnation. They bludgeoned their instruments with sharp implements and power tools but not much passion, lolling in and out of narcoleptic spells.

Shaker, his eardrums stuffed with shredded sanitary napkins, gazed up into the blaze of lamps and random halos, the endless heat on his face, seeing spots.

He walked over and tapped the shoulder of the nearest patron, thirtysome feet away, and said, “I see spots.”

The kid had to tweeze out an earplug to hear Shaker. But Shaker was whipping his head around too much, trying to knock the splotches from his vision, and missed the kid’s response. There was a smoke machine on stage, and the smoke was everywhere. When Shaker’s eyesight cleared, the kid was gone.

On the side of the stage, Shaker could see his ex-wife’s husband. The man stood about six foot six, tailored shirt sucked into a crisp pair of khakis, collar buttoned at the jugular, no tie. Both benefactor and manager, he rented the arenas for her, the tour buses, the union crew, bought airtime on radio and TV. He even bankrolled the greasy tabloid notoriety. Shaker, it seemed, was the only person in this artificial ecosystem not receiving some form of brownbag payola, and he felt a little excluded, a little nixed. His ex-wife had become one of those public-domain punchlines that linger in the netherworld of quasi-fame, dazed and hostile, although she had her adherents, a tiny but venerated gaggle of contrarian critics. There were several in every college town, every city. They penned jargony screeds that argued her unlistenable music was a subversive indictment against the capitalist privilege that had landed her on all those rented stages. In this version of events, she was a courageous dissident, a pop-culture saboteur, and not just a poseur art-nut subsidized by her very rich husband.

After the eleventh encore, she was ushered offstage by a cartel of leather-clad teamsters and unpaid interns. The overhead lamps ignited, and the arena was reshaped around a dense smog that hung like a diseased brain above the remaining audience. There were only three of them now, small and squint-eyed. Her set had lasted seven and a half hours. A single custodian came out onto the floor with a dustpan and broom, looked around, shrugged, and disappeared behind the service door.

Shaker, still maneuvering under his glue stupor, felt shriveled by the spectacle. His legs were sore. A metallic flavor filled his mouth. Twin security men with the close-cropped facial hair of silent film villains were stationed in the doorway, sharing something dainty in a roach clip. Shaker gave them the money in his wallet, then gave them the wallet, and they awarded him a handful of mushroom caps, which he gobbled all at once.

“I am a pillar of salt,” Shaker replied. He touched his left pectoral, knuckled it, squeezed. His eyes were misting. “I feel thick.”

Shaker used his shirtsleeve to blot the wetness from his forehead and face. “What are these socks doing on my feet?” he asked.

“You don’t look so good, guy. What other garbage you been taking?”

“All of aisle nine,” Shaker smiled.

Shaker buckled at the knees. The only activity in the entire arena was his body smacking glorious concrete.

“Touch me,” he moaned. “Someone please just touch me.”

He woke in a hospital bed three days later, feeling fine, absolutely fine. He had sweated all the sensation—national or not—out of his broken body, flushed his nervous, nervous system, the chemicals and the need for the chemicals. All of it purged. The doctors told Shaker they’d never seen adult nasal passages so hairless and clean.

His ex-wife never paid him a visit, although one of her roadies arrived with a much-abused tuba jammed full of yellow carnations. She didn’t bother to include a card.

Now here she is in Agog Manor, at least someone eerily derivative of her, and Shaker can’t tell if he is experiencing the same need or something new. Her husband, Royce, is slumbering upstairs, deposited in his sheets with a year’s worth of financial glossies banked around him. The greenhouse is dark. All life in the manor feels tranquillized, embargoed. Shaker hasn’t showered off the garbage smell yet. He’s standing in the doorway, the reek pulsating off him in concentric rings. The woman is stripped to her slip and sitting in front of the cold fireplace, scouring her hair with a tortoiseshell brush. Her legs are bruised and unshaven. Shaker recognizes the purple tattoo of a coiled serpent that crests her inner thigh. She stops brushing but doesn’t turn around. She only holds up the tortoiseshell, as if passing off a track-and-field baton.

“Isn’t it long enough you can reach yourself?”

“Don’t be a boob,” the woman replies.

Shaker kneels behind her and accepts the brush, performing a few practice rakes on his own head, and then he begins taking great whacks at hers. He runs through the strawberry blond curls, going with grain and against, until he feels something loosen, a tension unturn. He touches her neck; the skin seems to vibrate. He is aware a low-grade euphoria is blooming throughout his body, and he grudgingly submits to it. Then the woman starts to hum a familiar melody, an old outtake, a forgotten favorite. Shaker goes rigid. He tries to bung shut his ear canals by sheer force of will, but that only magnifies the lovelorn burn that’s being generated in his loin region. Grudgingly, he submits to this, too. Just as he is getting used to the humming, it trails off. Her hair is soft and tamed. Shaker sucks in a desperate breath as she leans backward, fitting her contours to his, their bodies molded, neither of them making any sound at all.

The only real surprise here, Shaker realizes, is how much the silence hurts his ears. 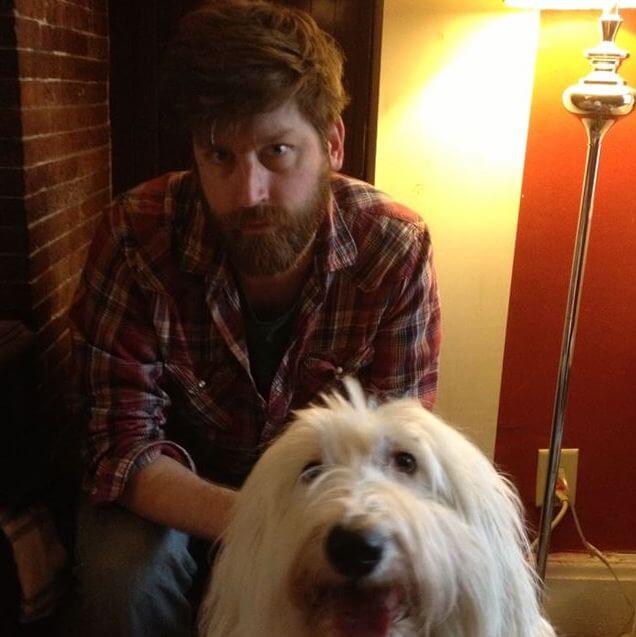 David Nutt
David Nutt is the author of The Great American Suction, published by Tyrant Books in February 2019. His fiction has appeared in Hobart, The American Reader, New York Tyrant, Electric Literature’s Okey-Panky, Green Mountains Review, NOO Journal, Juked, Open City, and Washington Square Review. He graduated from the MFA Program in Creative Writing at Syracuse University in 2012. He lives in Ithaca, NY, with his wife and dog and two cats.