Below is an excerpt of Temporal by Troy James Weaver. Troy recorded this from his home in Kansas and it sounds awesome. One day we’re going to release the whole book. For now listen to this and have a much better week because of it. Thanks, Troy. You rock. <3

Jared was a guy from Jersey who thought I was a girl named Amber from Kansas. We were kind of dating, I guess, and I am from Kansas, but my real name’s Aaron, and I have absolutely zero interest in fucking guys. Not saying Jared did, either, or even that there’s anything wrong with that—I’m just saying he didn’t know I was a guy and I did.

“Come on,” said Samantha. “We could wait all night trying to get him right.”

I agreed, so we hopped in my car and drove back to the suburbs, where our parents slept comfortably in their beds, snoring as if they were already dead.

We pulled into the driveway and cut the headlights. Cody fell and hit the concrete with a bang. We each grabbed an arm and hoisted him to walk.

“Ah, fuck, what the, what’s that smell?” said Samantha. “Cody? You alive, man? You smell like shit.”

“Shut the fuck up,” he said through clenched teeth.

My phone vibrated in my pocket. I thought maybe it was Jared, but that was just me being hopeful. It just as easily could have been Marcus, Marie, or Darius. It turned out to be my mom: you coming home tonight? I only saw this an hour later, after we got Cody covered up and hydrated and asleep. I didn’t reply. Instead I texted Jared: I know it’s late, but can you talk?

I was staring at my phone, waiting for a text to appear.

“You could at least tell me to fuck off or something,” she said.

She picked The Smiths.

I settled back in a beanbag chair, waiting. Occasionally I’d look up to see if Cody was still breathing, every now and then look at Samantha. She was pretty. She had this black hair and pale skin, and had a bit of a crooked smile, but I found it endearing. She was dancing while sitting on the floor, writhing, shaking her head—I don’t know how to describe it. We were all in our own little separate worlds and those worlds were crammed into this world. It was stuffy, you know? We liked the company, yet other times we wanted those other worlds to be crushed by meteors or asteroids, just like how the dinosaurs supposedly died. It couldn’t hurt much, right? Wouldn’t even see it coming. You don’t feel anything when you’re glued to a screen, even when you’re up late cooking up extinction theories.

Finally Jared texted: I’m half sleep. Can we talk tomorrow?

I typed: it’s just really…really? my bestie od’d n is in the icu and u wanna talk tomorrow?

Jared texted: So sorry, babe. I didn’t know. I hope shes ok? she gonna make it? u holding up?

One minute later, he texted: hello? for real, tho, forgive me? please, baby, I dind’t kno. love you.

“Who’re you talking to?” asked Samantha.

“Fuck you,” I said to my phone as I turned it off. “Nobody, nobody, just reading some shit about the asshole we voted into office.”

Samantha was still doing her amazing dances. I studied her in the mild light, and said, “You know, I think I’d rather listen to Joy Division, if you’re cool with that.”\

“That’s how I’d do it—right after Fitzcarraldo,” I said, yawning.

We listened to Ian Curtis and his depressing baritone for a while, not talking to each other.

I was losing steam, finally told Samantha I was going to call it a night and go to sleep.

“Think I’ll stay up for a bit longer, make sure he makes it, you know,” she said. “Oh, and don’t forget, we have to be on campus by eight-thirty at the absolute latest—test starts at eight-forty-five.”

I nodded, slid back into the beanbag chair, covered myself with a sheet, and closed my eyes. They weren’t closed all that long before I heard Cody grunt and start flopping around on the bed.

Then I heard Samantha, “You all right, Cody? You need anything?”

Then I heard him whisper, “Yeah.”

“What do you need? Water?” she asked.

“Wake me up if I sleep through the fire?” he said.

“Thanks,” he said, flopping, going back to sleep.

I finally fell asleep to his snoring, then her snoring, too, thinking stupid things, the fact of their lives lulling me into a dream where houses never burned and people never died. 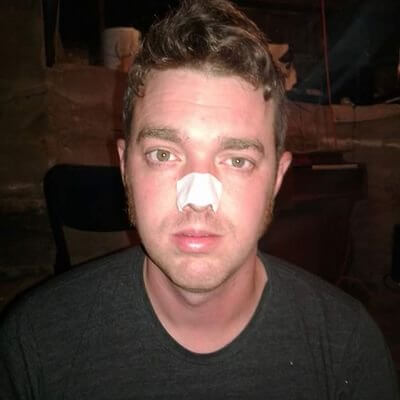 Troy James Weaver
Troy James Weaver is the author of Temporal, Witchita Stories, Visions, and Marigold. His work has appeared/or is forthcoming at New York Tyrant Magazine, The Nervous Breakdown, LitHub, Funhouse Magazine, Hobart, Juked, and many others. He lives in Wichita, Kansas with his wife and dogs.