The book, DUMBHEART/STUPIDFACE, is a new collection of poems from a new imprint of Civil Coping Mechanisms called Siren Songs. Please enjoy a reading from the author below (text too). If you’re cool, you can go and get this book here. Audio recorded by the author, Cooper Wilhelm. Enjoy!

I transcribe poems of mine I can mostly read
from a notebook
with the painstaking frustration of a Dickinson scholar
who is also Emily Dickinson with amnesia
from having lost the world,
and I begin to think I won’t like being dead.

know what it’s like to say nothing in a kitchen one winter morning,
light thrown across the table like a scarf,
but because in the afterlife I’d like to hang out

with Frank O’Hara and James Schuyler and I suspect
I won’t be invited to those parties.

It’s fine. There are options.
There aren’t.

But:
I could be the voice you hear in your head
but don’t hear
when almost buying movie theater nachos, or hitting whiskey #8,
or listening to love songs you don’t want to believe.

Most likely, I’ll end up eating Sunday lunch with Longfellow,
avuncular, burn-bearded man from my hometown,
who may be a bad influence insomuch as he loves Dante
for possibly the wrong reasons, and chose
to be an old man even in paradise.

And when I die they will say
Connor, you’re dead
and I will not correct them
because I will be dead.

in a world without words,
but I’m glad you didn’t pick up
so I could tell you all this.

And since it’s already later
just think:
Wherever you are
I could be on my way.

|Poem of a Monologue Spoken by One Partner to Another to Comfort Both After Both Have Made a Good-Faith Effort to Make Things Work, to be Open and Vulnerable While Still Balancing Self-Care with Support and Celebration of the Other — and After Both Have, Together and Separately, Come to the Tumorous Conclusion that What Each Needs is Not the Other and that to be Apart From the Other, Though Love and Complete Understanding of the Other (as Far as that is Ever Possible) Will Likely Persist in Each for Years — and After the Despair at Knowing that, Even if Either Partner Should One Day Find a Love that Similarly Takes them Out of Themselves While Reassuring them that they Do Actually Belong in the World, it will be Tainted by this Failure to be in Perfect Love, and at Knowing that Each Has Done this to Themselves and the Other, and at Knowing this has Led to Brief Flashes of Cruelty, the Claws of the Starving, the Most Dangerous Animals being the Wounded Ones — and After Realizing that the Time has Come to Release Themselves from the Duty to Protect even the Possibility of Hope as Far as the World of this Relationship and all its Possible Variations, its whole Multiverse of What Could Be, is Concerned — and having Argued this Point with themselves without Success Until at Last Arguing it with Sufficient Success to Momentarily Silence but Not Erase All Doubts.

|People I Could Name

The ghost of David Berkowitz comes to me as I eat breakfast
and complains. His neighbor is too demanding.
“True, yes, I am the killer, but I kill on your command, Craig.
Because Craig is Craig, the streets must run with Craig,” etc.
I barely have time to listen to my own problems,
but my new stache and loneliness win over a retired cop
and his still-on-duty cousin at the bar.
I buy us six beers. The two light up
and clue me in that the chalk I saw
running out to grab more eggs (flan
is hard) was not as I had thought,
a depthless grave for the most recent victim.
“You die, they just leave you there.
For pictures,” says ex-detective Chuck.
“Chalk’s for when you could still be alive,
so they set it down before they pick you up.”
It’s totemic. You leave your silhouette to lie
enacting death so you can see what new person
medicine will make of you.
Not to dwell on it.

Prehistoric hunters picked up on the idea
that if you drew the animal you wanted it
would link you to some citizen of the species.
Chained to the image, it could only die,
and anyone could be a prophet.
Every night Berkowitz lights a fire so he can call
the cops and no one thanks him. He picks up
extra shifts in his cab. People tip him,
but they don’t mean it.

Same outline, different positions.
People used to be better
at believing in monsters. Food was food.
Their neighbors didn’t scare them.

What was David’s body
count? 8?
With a gun designed to safely kill someone
in an airplane, even in the cockpit.
There were 1,080 terror attacks in the US between 1970 and 1975
and he barely hurt anyone.
But he wrote to the papers.
He got the eyes.
I try to tell the cops,
but by then I’ve lost
the thread of how the ideas of things relate
to the things themselves.
It’s terrible what these kids are doing says Chuck’s cousin
I think meaning k2 or kneeling during songs.

The cops drop a bomb on a house in Philadelphia,
run over Branch Davidians in a tank,
but they take David Berkowitz alive,
Jeff Dahmer alive
Eng alive, Lake alive,
Manson, Bundy, Gein, Rahami,
Lucas, Roof, Alive Alive Alive.
And somehow a thousand men and women,
armed with just their lives,
people the papers will never name enough,
were too much to lay hands on and hold
even for judgment before the law. 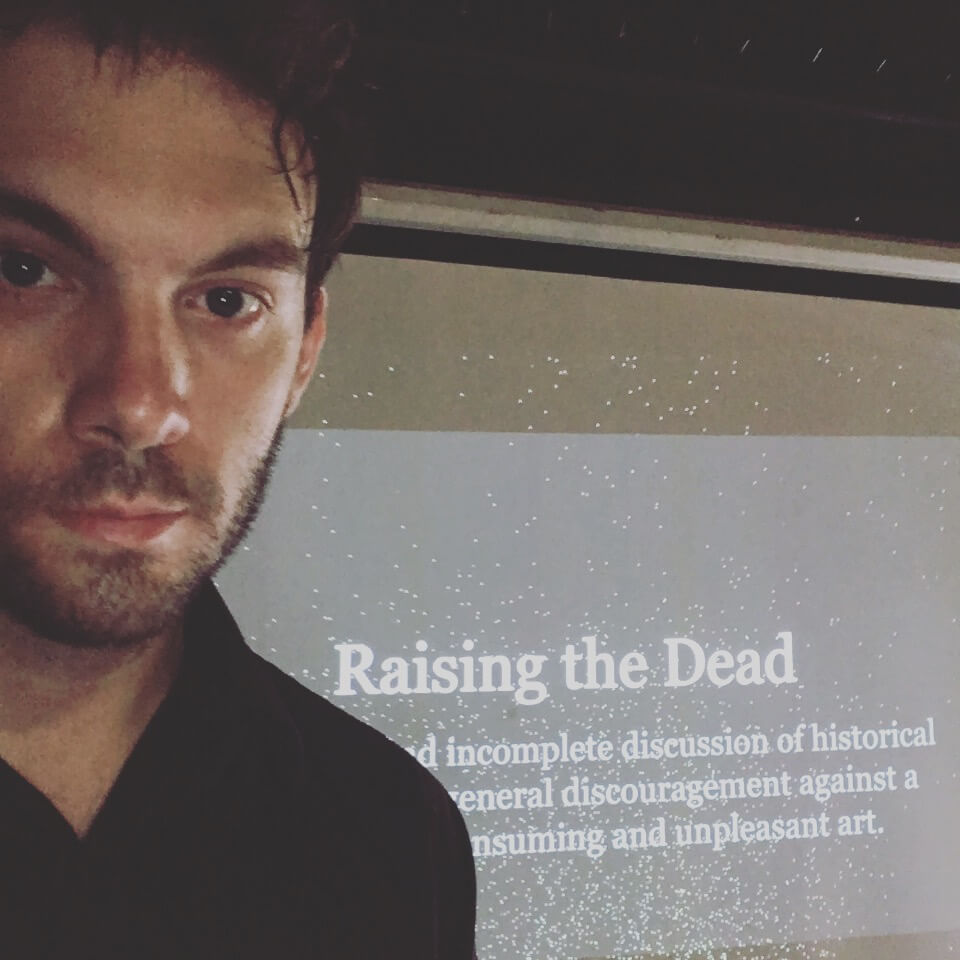 Cooper Wilhelm
Cooper Wilhelm is a writer, researcher, and occultist living in NYC. He is the author of a microchapbook about necromancy and breakups called Klaatu Verata Nikto (Ghost City Press/2016), a chapbook of poems about pigs called Swine Songs (Business Bear Press/2018), and a full-length collection of poems called DUMBHEART/STUPIDFACE (Civil Coping Mechanisms, Siren Songs/2017). His work has appeared in Time Out New York; Cosmonauts Avenue; Luna Luna; Yes, Poetry; Rust + Moth; Moonsick Magazine; Arc; Reality Beach; and elsewhere. He also writes poems on postcards and mails them to strangers he looks up in phonebooks at PoetryAndStrangers.com. He was the host of Into the Dark, a show for Radio Free Brooklyn about witchcraft. He tweets @cooperwilhelm.