Enjoy the first of several poems from the incredible J. Bailey Hutchinson. Thanks so much for these lovely readings. We hope everyone is having a great holiday season for real. Love. <3

Once—I was a girl, at my dad’s for the weekend—
my neighbor was unkind to my dog, which, by my metric,

meant he had to die. Or, said Mallory, a Catholic kid who
one time beat me with a Razor scooter, who showed me

the word fingered in her sister’s diary. She nodded
at Mr. Edd’s brand-new Mazda, nacreous as a clams-hinge,

then pedalled us to the Circle K where we bought all
the bologna our sportsbras could carry. Original. Cheddar-

jalapeño. Sweetonion. This was summer. And noon.
What a reek was gathered as we mumped Edd’s hood

car and declare someone’s earned an Otterpop. So bold
I’d forgotten the sun, the treebare yard. Our neighborhood

of eyes. I’d forgotten my father, only a porch-width away,
so we stepped into my dad’s bedroom, toeing the coiled

serpent of his CPAP machine. Heard nothing. My dad,
sometimes, made no sounds while sleeping, unable

to shift the bulging bridge in the choke-spot
of his throat, and I’d wait for the whale-haul

of breath in his body-near-drowned. Mallory scrammed
when she saw the Magnum by his bed. And. I wondered.

Crimped with my new-and-keen meanness. If I dragged him
sharp by the arm from some breathless dream, would he—

then Edd, knuckling the storm door. My dog in a frantic
yammer. Did you see anything? Anyone? asked Edd, and dad

looked at me. Said, I don’t, said, I mean, said,
I was home the whole time. And later, in the bathroom, I saw:

my mouth, rubied with juice. 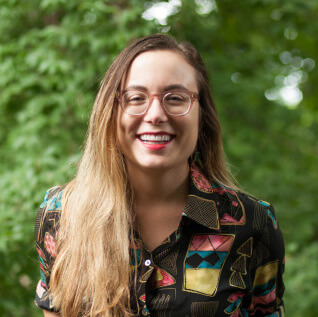 J. Bailey Hutchinson
J. Bailey Hutchinson is a poet from Memphis, Tennessee. She is currently pursuing her MFA at the University of Arkansas, Fayetteville, where she is Poetry Editor for the Arkansas International literary magazine and on the Board of Directors for the Open Mouth Reading Series. Hutchinson is the winner of New South's 2018 Poetry Contest and the recipient of an Artists 360 grant, and her work has appeared in or is forthcoming from Front Porch, LIT, Beloit, Nimrod, and more.