Sex sex sex. It’s everywhere these days. It has become a startling epidemic in our time: sex. Everywhere you go, there is sex. I wake up in the morning, sex falls on me from the ceiling. I get the mail, some sex comes out of the mailbox instead, and then there’s sex all over me. I go to the store and buy food but then when I get back it’s just sex in the bags. Sex sex sex. But what is it? Everyone’s talking about it but no one wants to truly speak. So listen up. Because I’m going to tell you about sex. Here are the A, B, C’s of the birds and the bees.

A rare moment of consensus in the sex community is that sex always involves living things. Pundits and mere peons agree, sex always involves living things. Laura Weinstein at UC Berkeley says, in her book, ‘Hey Dummy, Sex!’ “A rock can’t have sex with anything. A rock can’t even have sex with another rock. Even if you think sex between rocks could happen, like where someone is rubbing one rock against another, that’s still a living thing involved, so…..SORRY!” Indeed Laura, couldn’t have said it better myself. Sex necessarily involves at least one living thing. So, to clarify, if the wind blows two pieces of dust against each other, that is NOT, I repeat, NOT sex. But, if I, as a living thing, get naked and roll around in some dust, then that IS sex. It is important to start with a principle on which everyone can agree.

2. Things In Positions With Other Things

No matter how you slice it, there are going to be things (which are living) that have to be in a somewhat agreed upon position with another (or other) thing(s) (which again, are living). Sometimes a thing will be inside another thing. Sometimes vice versa. Sometimes a thing will be placed upon another thing or perhaps handled by another thing. Additionally, a thing might be struck/bitten/flicked/generally moved. But the essence is clear — it must involve one or more living things in position with another thing (not necessarily living). In this way, one cannot be said to be having sex with other living things that are far away. In the same way, as sometimes things might be positioned around another thing circumstantially, that doesn’t necessary make it sex. Wait, hold up, doctor…DJ, stop spinning that record….SAY WHAT!? If you still with me here, let’s move on….

3. The Feeling Of Having Had Sex

Nine out of ten people will tell you, that after having sex, you will notice you feel like you just had sex. There is an almost near certainty that one has just had sex based on the feeling of having it earlier, and the knowledge that one’s current feeling is consequent. Dr. Henry Bloom reminds us that, like, say, sneezing, and having sneezed, ‘sex is something that has a feeling and can be remembered, such that one knows the feeling of having done it’ (Sex This! 2001, University of Omaha Press). Thanks, doc!

As old as time itself, this debate rages on. Do the living things involved remain clothed or not? Some say yes, some say no. Some say, dude it’s whatever you want, relax. Traditional Clothists feel that sex is only truly achieved in clothing, while the opposition says quite the opposite–that that is in fact, impossible. Regardless of where you stand, you’ll find it’s an issue that is increasingly gaining ground in many circles. A recent anonymous study at University of Michigan Institute for Sex Stuff yielded testimonials ranging from, ‘I prefer sex with clothes on because sometimes the room is cold’ to ‘dude how the fuck am I supposed to rest my thing on someone else’s thing with my fucking clothes on, and how much does this survey pay?’ to ‘is this a real study?’ The proof is anywhere but in the pudding in this case.

5. Position Of Non Sex-Things During Sex

In the same way that things must be in certain positions with one or more (less?) things to constitute sex, the remainder of each living thing’s things do not require any specific placement (geographically or anatomically really [for instance, if in a genuine act of sex, the, say, 14 living things, could be in any given united state, a different country on this hemisphere or anywhere really and, likewise, if one’s head were to float off while having sex, it would still be sex, I think]). Same thing with daylight savings time. If it happens during sex, the sex still happened. Likewise for leap years and opposite days.

6. If You Think About Anything Other Than Sex During Sex, It’s Not Sex

This one is pretty confusing at first, but hear me out, because the data holds up. If, say, you are having sex, and you think, not even about, just think the thing that is barbecue potato chips, you are then not having sex. Even if you somehow were able to clone yourself eight thousand times and be all having sex with each other inside of another clone of yourself having sex with eight thousand million other living things, and even just one of them remembered that barbecue potato chips exist, none of them would be having sex. In this way, it is very important to constantly say, ‘sex’ while having sex, while looking into the eyes of the other living thing(s). If, however, you break stride and think about, say, water or something, you and whoever else is involved must exit the area, both count to thirty and return to try again.

In a staggering study conducted at Georgetown University, scientists and other sex specialists discovered that roughly 85% of participants viewed the same thing as ‘not a problem’ after sex, yet ‘as a problem’ beforehand. Participants further noted on follow up documents, as to why it seemed such, that ‘fuck (they) just don’t know but yeah.’ in this way, many purport that much like alcohol/cigarettes/drugs, sex is awesome. While others still maintain sex is the problem itself. A real head scratcher, but such is the case. 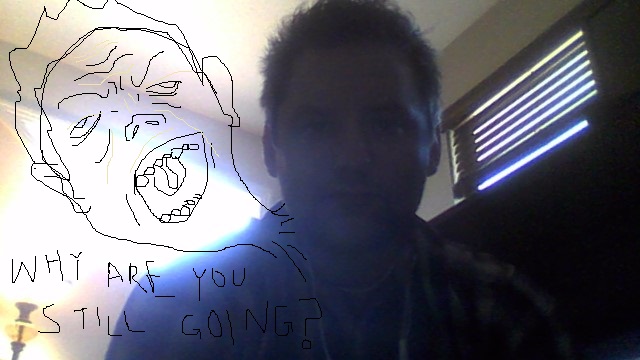 Sam Pink
Sam Pink is the author of Rontel, The No Hellos Diet, Hurt Others, I Am Going to Clone Myself Then Kill the Clone and Eat It, Frowns Need Friends Too, and the cult hit Person. His new book Your Glass Head Against The Brick Parade Of Now What is amazing and available from House Of Vlad.  See his drawings here.