Out now in audio from Talking Book: Caca Dolce by Chelsea Martin and narrated by the great Sarah Rouse.  Thanks to Soft Skull Press and all who made it possible. You can get it here so please do! In the meantime here’s a clip of the book. Please and thank you. <3

The first house we ever toilet-papered belonged to somebody we didn’t know at all. My friends and I had chosen the house for being a safe-but-not-too-far distance from my house, very distant from the Hidden Valley security guard shacks, somewhat secluded from other houses, but close to a variety of trees and shrubs and fences—places we could hide if we needed to.

We did a terrible job that first time—a few throws over a tree and the rest wadded up and tossed around the lawn before we ran away giggling—but the experience filled me with adrenaline.

My house had become a popular house for sleepovers, because my mom would let us “sneak” out as much as we wanted. With my core group of friends—Catlin, Anabelle, Lauren, and Lauren—I would walk around the empty golf courses that were off-limits during the day. We would lie on the impossibly fine-cut grass and talk about secret stuff, because that time of night in an off-limits place was made for secrets.

It was my mom who had first mentioned toilet-papering.

“You guys have never toilet-papered a house?” she had said. “Ever? How weird.”

That first night, my friends and I left through the sliding glass door in my bedroom, my mom whispering behind us, “Don’t get caught! I’ll leave a light on for you guys.”

After that, I became obsessed with toilet-papering houses. Strangers’ houses, houses of people I vaguely knew, houses I wished I lived in, houses I used to live in that were now occupied by other tenants, the house of the teacher I had never had class with but who I heard was mean, the house of the people who’d refused to buy Save the Rainforest T-shirts from me the year before when I was trying to win a Cat in the Hat hat by outselling my classmates.

Everything about toilet-papering houses was gratifying: the supply organization, the sneaking around, the security guards driving around looking for vandals like us, the potential for punishment. But possibly the best part was riding my bike past the house the next morning to check whether it was cleaned up or not. Knowing that the evidence of my vandalism was available for all to see in the light of day made me feel powerful. I liked thinking about the confusion I’d inspired in residents the next morning, and how I’d never be suspected because I was just a little girl.

That year we were twelve, and friend dynamics were beginning to feel more complicated. There was always some issue between us. Catlin would be mad at one of the Laurens, or Anabelle and Lauren would be fighting, or Catlin and I would be competing for one of the Laurens’ attention, or Anabelle would be convincing us that Catlin wasn’t our friend. The five of us rarely hung out all together. This was fine with me, as it was easier to sneak around with only two or three people. It also allowed me to rotate who I would take with me toilet-papering so that I could satisfy my insatiable enthusiasm for it without anybody getting burned out.

My friends still liked sleeping over and sneaking out, but only to meet up with boys. I was fine with this in theory. We didn’t hang out much with boys at school, and it seemed exciting to hang out with people outside of a classroom setting. But usually we would spend the whole night calling different boys, trying to find someone who would be willing and able to meet up with us, wasting it on unsuccessful coordination. It was time that would have been better spent, in my opinion, toilet-papering houses.

Sometimes, though, we were able to arrange for boys to meet up with us. We had a few spots around the neighborhood that were safe from parents and security guards: a mysterious half-buried empty pipe large enough for ten of us to crawl into, a house that was being renovated that was often left unlocked, and Lauren’s stepbrother’s bedroom, which was a separate granny unit next to the main house.

We would play Truth or Dare and take turns kissing each other and, if it was my turn to determine what the dare would be, spitting into each other’s mouths a certain number of times. Eventually all my friends would disappear with a boy to participate in non-dare-based kissing, and I would be left with someone like Lucas, who had a lazy eye and who I was strongly attracted to despite my own desire not to be.

Go get the audiobook right now! Please and thank you. 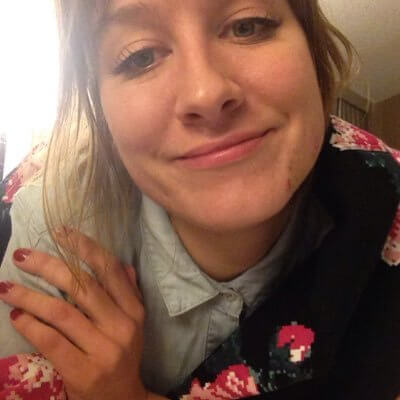 Chelsea Martin
Chelsea Martin is the author of Everything Was Fine Until Whatever; The Really Funny Thing About Apathy; Even Though I Don’t Miss You, which was named one of the Best Indie Books of 2013 by Dazed magazine; and Mickey. Her work has appeared in Buzzfeed, Hobart, Lenny Letter, Vice, and Catapult, and chosen as a Notable Essay in Best American Essays 2016. She is a comic artist and illustrator and the creative director of Universal Error and currently lives in Washington State. http://www.jerkethics.com/