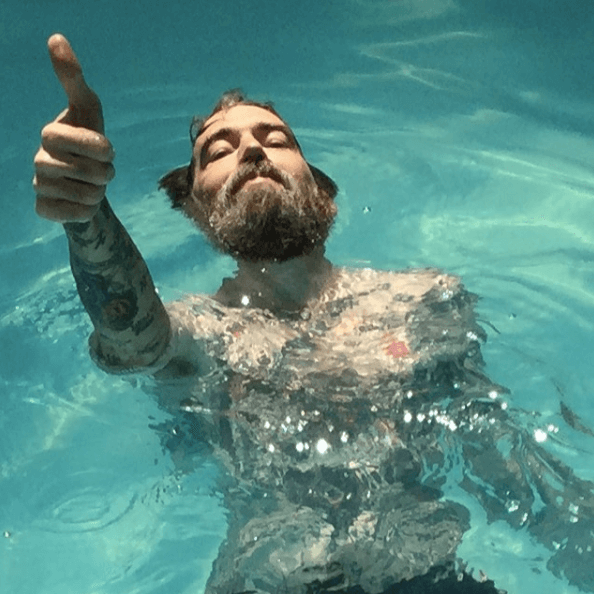 Brad Phillips visited us in our dreams and gave us a reading from his new book The True Story of John Lang and The Hollywood ESP Cult. Thanks, Brad. And thanks to Holler Boys and Alec Sturgis for the awesome music. You can get Brad Phillips’ recent book ESSAYS & FICTIONS from Tyrant Books right here.

Listen to the episode below on Soundcloud or on Apple Podcasts, Spotify, Sticher Radio, Google Play, etc.

Three speeding motorcycles with loud engines tearing through a concrete structure sounds like what horror looks like.

Gabe was ahead of Jamie and me, who weren’t far behind him. I did take note of the fact I’d suddenly become expert at advanced defensive motorcycle riding, and that Jamie was riding like she did it for money. There was space on each floor for us three to spread out. Gabe regarded us as stupid children when he saw we hadn’t split. The three of us drove in semicircles up and down the two top floors, then I saw the Bentley come charging in like a tiger from the reeds. I knew those cars were expensive because they looked nice – I should have remembered that fast is expensive. Jamie and I were the closest to the front of the Bentley once it made a full left onto the first floor. The handsome man—now in white driving gloves—headed straight for me. Jamie raced left, squealingly. I got myself into a corner Handsome couldn’t get to. Having failed at staring him down, I drove straight towards him, then made a tight left to follow Jamie up the ramp. Behind us it was quiet. We heard Gabe driving slowly above us. We’d stopped driving. Nobody was driving. Just engines. It was the wrong kind of quiet; murder quiet……. Then we heard the gas of the Bentley, a screeching fast turn, and the sound of Gabe gunning it to drive downstairs again.
The handsome man and Bentley driver had reversed, spun around, and was speeding towards the turn on the first floor. We did not move. Gabe appeared, smiling at then gunning past us. Suddenly the glistening chrome of the Bentley’s bumper appeared. As going as fast as he could, Gabe smashed directly into the Bentley with his front tire. The speed of the collision – instead of rocketing through the air, Gabe was shot into, then lodged inside, the passenger side window, his head partly decapitated and visibly dangling

I threw up on myself and then Jamie threw up on the ground.
By way of ricochet, she partly threw up on me as well.
This all happened in less than five seconds.

We stared at each other with terror in our eyes, which seemed reasonable.
We were each still sitting on running motorcycles. Horrible sounds were coming from the Bentley. An aquatically fiberglass sound that imposed itself on the acoustics of the otherwise silent garage. It was an awful sound which spited nature. Suddenly the horn went off in the Bentley. It went off like it does in movies when a person is shot at close range, causing their head to land on the steering wheel. One single blaring continuous honk, again made sinister by contrasting silence. This honk will usually signal the end of a dramatic scene in film or on television. I composed myself and saw that the Handsome Man’s head had landed on the steering wheel, and from an injury sincerely sustained in a car chase, which contributed to the cinematic quality of what was happening.

Jamie and I looked at each other and sighed – he was at least unconscious, and hopefully dead.
I retched a little when I looked at Jamie, and then she threw up a second time, soiling my pant leg.
We saw that the driver’s side door was wedged against the concrete wall so that Gabe’s reorganized body would prevent the driver from leaving by the passenger’s side. We walked our Kawasaki’s closer and saw that the head on the steering wheel was not immobile. It was searching for its purpose. Moving, if only as a baby moves its head. Trying not to look at Gabe was challenging. I’d never believed how long they say our intestines are, but the coiled length unspooling from Gabe’s stomach over the hood of the car convinced me they’re as long as they say.

I guess we both got PTSD right then when we saw our friend’s insides on the outside.
I threw up again, on my shoe this time. Jamie started to cry, finally relieved of her nausea.
I’d thrown up on myself twice, and been thrown up on twice by ricochet.
There was no lack of vomit.

I’ve learned from television and movies that it’s preferable to be shot by an expensive gun because you die before you hear the sound of the gunshot. 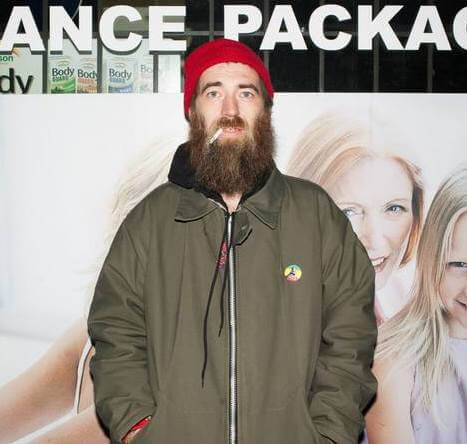 Brad Phillips
Brad Phillips is a contemporary Canadian artist and writer. He is best known for his work around subjects like addiction, mental illness, and the more obscure aspects of human sexuality. His first book of short stories, Essays and Fictions, was published in 2019.