Sam Pink is the author of 8 books, my favorites of which, and perhaps the most notable, being the novels Person [hell yeah, i could see that] and Rontel [meh, a few good parts, overall too cartoonish], as well as a collection of previously published poetry and short fiction, The Collected Suicide Notes [looks really nice, buy it off me personally and i’ll cut you a deal mehe]. Sam’s writing is refreshingly confident while simultaneously uncontrived and intentional [shithead cult for life]. He is one of the most exciting authors I’ve had the pleasure of reading and thinking about [me too, it’s crazy, you don’t even know].

Your Glass Head Against The Brick Parade Of Now What’s, Pink’s most recent release [a high caliber grab you by the seat of your pants kick in the pants], is a book-length poem that does not come from, and is not meant for, the world of poetry [fuck, good line, Jordan. Didn’t necessarily think this sentiment before reading your line but then immediately felt indignant and righteous and angry and ready for war. Fuck you, poetry world. You don’t want this book? Well guess what, chief, it doesn’t want you! $8 self published on lulu or 5 through house of vlad press ebook version, sure to put the pepper in your step]. It’s aggressive in its independence from the reader, asserting, again and again, that the way in which it needs you is not at all, existing not so much contrarily to the “other” as in spite of her – the book was self-published and the title put on the back cover [have wanted to do that for years but everyone told me you can’t do that. Well guess what stupid poetry world! I did that! So kiss my ass, once, lightly, at the peak of one cheek, eyes closed]. It does, however, welcome you to join it in its suffering [hell yeah, anyone can be on the team maybe]. The poem embodies everything I liked about poetry before learning that poetry sucked [you suck]. 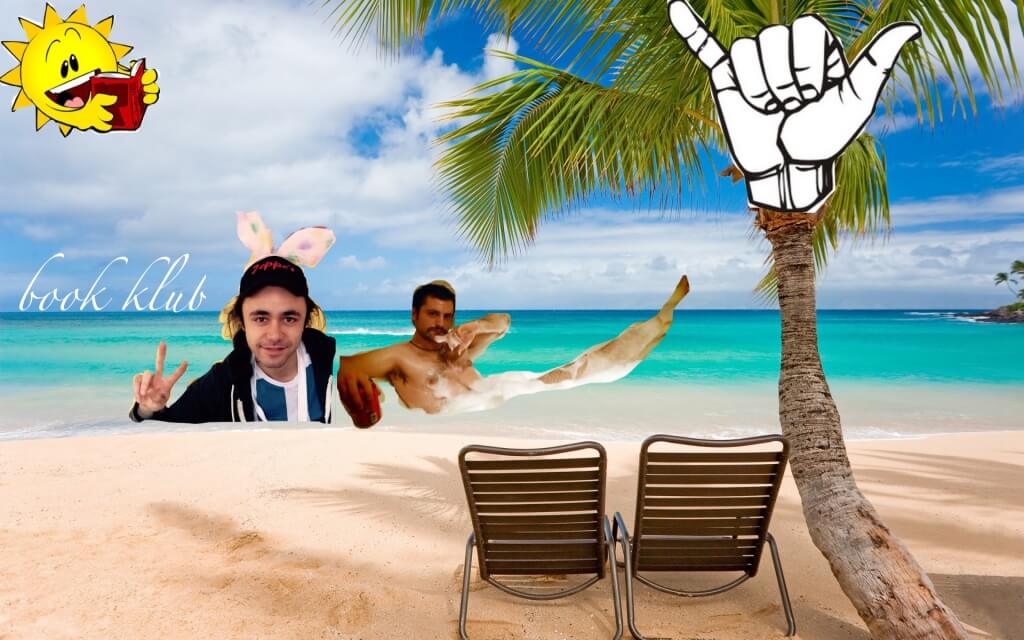 PART II: TALKING ABOUT WRITING AS WRITERS WHO ARE TALKING

Jordan: My dude. I re-read your book… I couldn’t think of shit to ask. It sucked the second time around. Great first time, shitty second.

Jordan: One thing I wanted to ask was about the person who compared it to Howl.

Jordan: I wanted to ask, what’s Howl? Jk… Um… How do you feel about it being compared to Howl?

Sam: Lol. Not sure. I read Howl. I seemed to enjoy it a little. But that was ten years ago. I like the idea of people comparing it to an epic or something like Howl, because I wanted to write a full-length poem. Howl was an inside job.

Jordan: What other full-length poems do you like? I think this is the only one I’ve read.

Sam: I like this guy named A.R. Ammons. He wrote a few really long poems. I think I like the idea because it allows you to like, build a world and then really swim around in it. Rifle off them lines. Rather than going for a short thing.

Sam: Oh to be sure. A pummeling. A pure literary and cultural pummeling. Leaving one to wonder, quite simply, what the fuck.

Sam: I mean, quite frankly, what else is there? Give it to me straight or not at all. You see, Jordan, the line – both as a measurement of meaning and as a geometric thing – is from one point to another. See where i’m going?

Sam: Here’s one point (me) and here’s the other (you). Are you scared? For our readers at home, of course, they might be wondering about just that. I’m not going to flimflam you with curvy lines willy nilly.

Jordan: Then what are you going to do?

Sam: Well, to be truthful, I’m going to, straight up with no chaser, provide you with the goods. I’m going to mine the pudding of my brain and serve it up still hot. Do you feel me?

PART III: TALKING ABOUT SELF-PUBLISHING AS TWO WRITERS TALKING THEN WRITING IT

Sam: It’s like, I believe it was Yung Buk in Psychodrama’s song “Do What You Wanna Do,” who says, “Be ready for the static bitch.”

Jordan: Why not go with a major publishing house?

Sam: I must say that was on my mind. I just KNEW that Vintage was banging down doors to get their hands on a highly unmarketable bleak ass poem. But in the end I stood my ground and put it out on my own terms. Quite simply, because it was the only chance I had to put the title on the back cover. I had a few chats with Justine Rindenberg at Vintage and we felt it just wasn’t the right time. I remember we were in Soho eating at Chew, overlooking the veranda. And I said, I says, “Babe, just, not now.” And she gently munched her baby greens and nodded wistfully as though lamenting a time not yet passed. Can you imagine? Anyhow, the service at Chew was only so so. And that’s not including their dubious ambience. Anyhow babe, I want to talk more about myself.

Jordan: I recently read a piece you wrote about the upcoming election, and I wanted to know, what does voting mean in 2016? How does voting look in the modern age?

Sam: I’ll tell you what it means. It means everything. It means the world. It means Christmas. It means vacays with the fam. It means stars. It means blood sweat and tears. The whole damn shebang. Clean out your ears, America. It’s time to take the hearing test.

Jordan: Fucking, god damn it. I drank way too much caffeine.

Sam: Ahh. It reminds me of something J.K. Rowling once said, after the release of Bleak House, which was, “Coffee, like a good coaster, is something to rely on.”

Sam: A thin composite of cardboard and perhaps a design, meant to put a layer between your drink and the surface on which it rests, thereby eliminating unsightly stains.

Sam: If you rest your drink on your shirt, then yes. Yes all the way. Which is funny, because just yesterday I found myself wearing a soccer jersey that somehow, just somehow, had a coffee ring on the stomach area. Figure that one out!!! What the hell was I doing?

Sam: How is the Ohio fam? I always think fondly of that state and it’s great dedication to representing the fucking crushing bleakness of the midwest.

Sam: Aside from the people who seem highly invested in Ohio State football, I think fondly of that state.

Jordan: Lol, fuckin… I wish you could’ve come that one time. I don’t know what happened.

Sam: Time happened, friend. Time. And who are we but simple merchants in its marketplace.

Jordan: Ahhh. I am pleased.

Sam: Oh my, let’s figure it out. Let us unstick.

Sam: Pertaining to Glass Head…? My friend, what isn’t sticky? The lines stick to your psyche like so many bugs on a sweaty body. I dare you to unstick yourself from its bleak promise.

Jordan: Who’s that kid? @oneloveasshole? Do you know him? I’ve noticed your public support.

Sam: If i have our history correct, he contacted me a while ago about writing a review for maybe Person or Rontel and we have since maintained correspondence. I am now very much enjoying his writing. Really hope that kid hits paydirt. Have read his novel ‘welfare’ to be published sometime next year i am to believe.

Jordan: Talk about Florida compared to Chicago. I still can’t believe you’re not in Chicago.

Sam: Yes, quite a shift. I miss Chicago. I hope to return to that fickle fuck one day. Return to its sooty bosom, and suckle as though on the verge of starvation.

Sam: Lately not much. Drawing, a little writing. Some other work in the pipelines. I’ve been commissioned to write a script and am waiting on a contract for Garbage Times.

Sam: What is life but a script dear Jordan? Other than that, just barely scraping by as usual. Getting guap where I can. Trying to avoid returning to bar work.

Jordan: I still sometimes fantasize about some rich old lady paying me, you and Noah, and some others I guess, to like, live in her guest mansion and write.

Sam: I mean, I’d do yardwork. Like, I’d throw in some bonus material.

Jordan: For sure. Clean her pool, dust her mantle. What the fuck else my dude? I want to hang out.

Sam: Yes of course. To rekindle the days of Book Klub.

Jordan: God damn it. I feel like I know a lot of people in Cleveland, but none compares to my guys. Book Klub. How’s the ol’ lady?

Jordan: What kind of sandwich?

Sam: I believe she is making herself a ham and salami sandwich, on some kind of seedy nut bread. With mayo of course lol.

Jordan: Is there anything you want to say about your book?

Sam: I would like to say for people to buy it, because i think it’s really good, and i also need money to buy groceries. And it’s only eight dollars. And people always talk about directly supporting an author, but then only buy books from publishers. So like, ANTE UP! Even if like, two thousand people bought it, it would probably still only equate to minimum wage. So do the math. 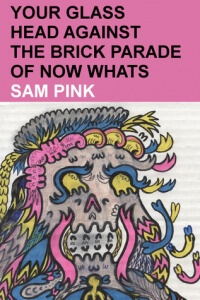 BUY YOUR GLASS HEAD AGAINST THE BRICK PARADE OF NOW WHATS 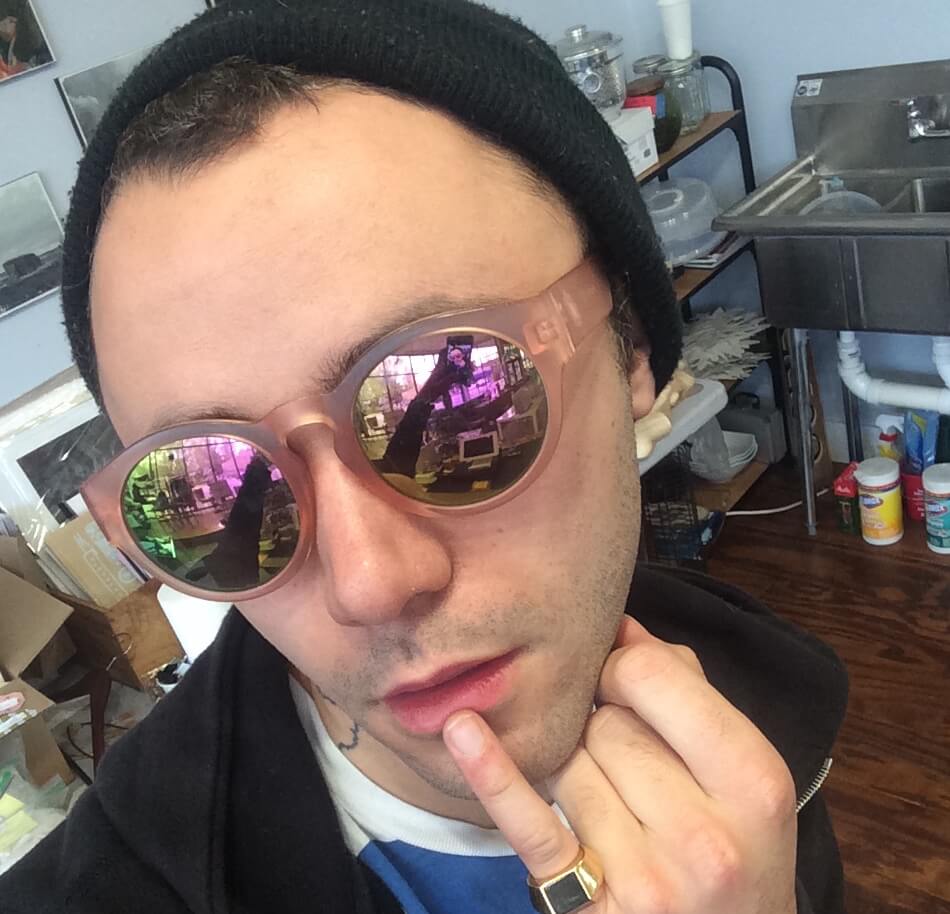 Jordan Castro
Jordan Castro is the author of the poetry books if i really wanted to feel happy i'd feel happy already (Civil Coping Mechanisms, 2014) and YOUNG AMERICANS (2013). He has a Twitter and an Instagram. He lives in Cleveland, OH.

Sam Pink is the author of Rontel, The No Hellos Diet, Hurt Others, I Am Going to Clone Myself Then Kill the Clone and Eat It, Frowns Need Friends Too, and the cult hit Person. His new book Your Glass Head Against The Brick Parade Of Now What is amazing and available from House Of Vlad.  See his drawings here.