Jingle Bells is on loop in Burger King. And not even the full version but some minute and half hybrid that is all chorus. At first I hardly register the ring ting tingle amidst the pirate chatter that is Northern-accented Chinese (Arrr Arrr Arrr), but a coworker points it out and it centers in my eating experience. The fifth time through my spicy chicken sandwich has become so soiled by yuletide I can barely choke it down; soggy fries languish in ketchup wonderland. “Talk about something please,” my coworker says in a conversational lull. “I can’t take this anymore.” The chemical make-up of flame-broil.

In Dalian, Liaoning, the sky is clear today. A couple of weeks ago the AQI (Air Quality Index) reached 500 and beyond (it goes no higher); the sky darkened like a monsoon of particulate matter. We licked oil off the wind. It is a foul thing and one is better to stay inside on such a day; my app mandates wearing a mask, forbids jogging, children outside. Each morning while dressing, check the weather – it’s cold – check the air – is it breathable?

Q: What do we sacrifice to the sky?

A: Everything. [That which is cheap and plastic and fills the checkout aisles of Target and Walmart. That which costs a thousand dollars (marked down with a subsidy from AT&T). That which fits in your pocket or palm. That which is made by workers who write poetry of their despair in a spare ten minutes in a cramped dormitory of a Shenzhen factory. That which suicides. Check your stocking.]

昏黄的灯光下我一再发呆，傻笑
Under the dull yellow light again I stare blankly, chuckling like an idiot*

For most here (and there) there is no religious significance to Christmas Day; my coworker, however, will go to an underground church service he tells me over Burger King – “the government-sanctioned churches…” he trails off, shrugs, grins, eats a chicken finger. My students will shop, call home sheepishly for more money. The man who owns the malls here, Wang Jianlin, is very rich. He just bought a Hollywood studio and plans to further expand his holdings in the U.S. entertainment industry. There is a tree in the lobby of my building, Christmas lights and Chinese lanterns set up in the courtyard.

It used to be that Chinese products made for export had a higher quality than those meant for domestic consumption. This is changing. Chinese consumers have demanded better – they deserve the same as Western consumers, if not more and better. I’d been in a Walmart just a few times in my life before I moved to Dalian; now I buy my groceries there. The lady who weighs the produce has a mutated arm like an extra in a sci-fi film. She swings the bag closed with the mastery of a cowboy and his lariat. Applies the sticker with her teeth. Mars is for Martians.

For the New Year I’m heading to Beijing. It will be my first visit to the 3000-year-old capital. The air is much worse there. Here at least we have the ocean breeze to periodically push out the pollution. In Beijing, it is trapped. Last year alone, the sky killed one million. 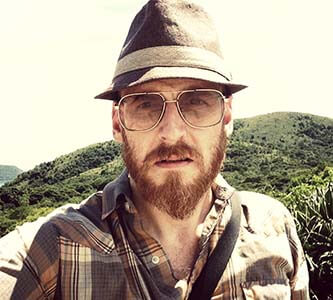 Erik Wennermark
Erik Wennermark used to live in Hong Kong, but now writes prose in Tokyo, Japan. You can find his writing in Guernica Magazine, PANK, The Rumpus and lots of other places. Follow him on Twitter.