College Novel by Blake Middleton is coming soon from Apocalypse Party. Here’s the author reading you an excerpt. Thanks, Blake. Party on.

Later that day Jordan read The Shock Doctrine by Naomi Klein on a lounge chair in the sunlight by the pool. Abby got back from work around 2 p.m. and, after a few minutes of casual conversation, suggested that they each take an Adderall and read for a while. They each took 20 mg Adderall. Abby read a biography about John Brown, which Jordan had suggested and let her borrow, and he continued reading The Shock Doctrine, then finished a chapter about South Africa and said, ‘It’s nice out. We should take Acid.’

‘Okay,’ Abby said, seeming less hesitant than when Jordan suggested taking mushrooms, and they each ingested one strip of acid, then walked to the dock, laid down on a pool towel, and waited for the drugs to start working.

‘Kanye West and trees are the only things that exist right now,’ Abby said while lying on a lounge chair next to Jordan, shortly after leaving the dock in a hurry, because the clouds, Abby had frantically said, looked like ‘the cat from Alice in Wonderland,’ and were scaring her. Jordan thought, feeling mildly anxious about the downward-seeming trajectory of Abby’s acid trip so far, ‘Abby wants to be alone on the chair,’ and mumbled, ‘I’m going in the pool,’ then slowly and cautiously entered the pool, unsure of what the water would feel like, and swam around the edge of the rectangular pool about four times, uncomfortably feeling like he was swimming through Jello, then went and sat on a slightly submerged, seat-like ledge near the deep-end. He stared at the house, which looked shadowy and medieval, and felt overwhelmed by the uncountable-seeming number of protruding angles, and stared at a large oak tree and listened intently to Kanye West, currently a lyric-less computer-y beat, self-consciously trying not to think about anything, and thought, ‘not thinking about anything,’ repetitively, for a minute, gradually becoming less aware of his surroundings, then, after gradually becoming aware that he was wasn’t aware of his surroundings, became aware again, and weakly discerned Abby’s voice, which Jordan thought seemed mildly softer than usual, and heard her say, ‘I feel like this pool chair is the only safe place,’ and Jordan intuitively and silently agreed.

‘I don’t like acid,’ Abby said inside the house about thirty minutes later.

Jordan was trying to make salad and couscous. ‘I don’t think I do either,’ he said. ‘I don’t want to be on a drug where I’m not capable of making a salad.’

‘People that take acid frequently probably hate reality. It’s just like, so unlike reality. I think I just like my life right now.’

‘I’m happy with everything. Yeah. I like my life. I don’t like acid,’ Jordan said and waved a knife through the air. ‘I feel like I’m like, ironically on acid. Acid is dumb. It’s just a dumb drug. What am I doing right now? What is this knife for?’ he said and laughed.

‘I thought you were making couscous?’ Abby said. ‘Do you remember?’

‘How to make couscous?’

‘Yeah…I think so. I just have to get the water to like, boil. Yeah. I can make couscous. I’m capable.’

They ate couscous and salad. ‘I know what we should do,’ Abby said enthusiastically. She smiled.

‘The grass,’ Abby said, and stood suddenly, walked outside, grabbed a beach towel off the lounge chair, then held Jordan’s hand and lead him outside the screened-in pool deck.

‘Nothing seems okay right now,’ Abby said while staring at the sky. ‘I can’t look at the house. I just like the trees, I think, because everything else seems awful.’

‘I forgot we were on drugs,’ Abby said. ‘We’re on drugs,’ she said loudly, then made a noise like she was relieved.

‘We’re on drugs,’ Jordan said and laughed. ‘Maybe we shouldn’t yell about being on drugs so much though. I think that’s why acid makes people freak out. They like, forget that they took drugs, and mistake whatever is happening for reality. I’m usually good at taking drugs and thinking I’m on drugs, and not freaking out.’

‘I’m glad we only took one strip. I couldn’t look at your face, Jordan. It was so long. I couldn’t even kiss you.’

In bed an hour later Abby stared at the chandler with amazement, and said that she was still tripping, and kissed Jordan on the neck. ‘I feel like I’m kissing a baby dolphin,’ she said.

‘Do you have a thing for baby dolphins?’ Jordan said.

‘I do now,’ Abby said, and smiled endearingly. Jordan felt relieved that Abby could look at his face and kiss him again. 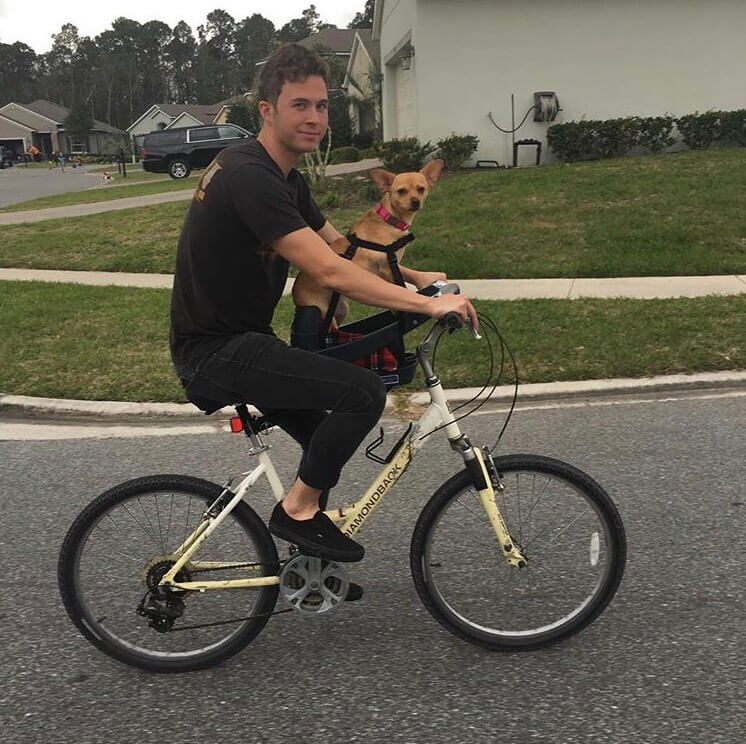