Old people freak me out.

I think that started back in 6th grade, when I stayed at my grandma’s place for a few weeks while recovering from Haemophilus parainfluenzae, a serious throat infection I’d picked up. Nasty bug. Messed me up bad. They took me out of school and everything. People brought me homework but I never did it.

My world shrank down to a couch in Grandma’s living room where I ate, read comics, and slept whenever the coughing fits took a break. My mom would come visit each day after work, but I spent most of my time with Grandma, who sat in her armchair and watched Jeopardy and read the paper.

At first, I took comfort in the change of scenery. I’d been having nightmares of monsters and creatures from hell as far back as I could remember, but they came to an abrupt end during those first few days. I felt safe.

Then, one night, I heard a muffled moan coming from her room. I pulled the blanket over my head, stuck my fingers in my ears. The moan echoed around my body, bouncing off my organs. I couldn’t escape it so I slipped off the couch, tiptoed down the hallway, and stood by her door. Night had somehow changed the place, made it home to the creeping dead. At any moment something would reach out and grab me. I imagined opening the door and seeing Grandma’s corpse. I pictured the eyes snapping open, yellow eyes, her mouth curling into a smile followed by a demonic laugh. I froze, whispered, “Grandma?”

I felt a coughing fit coming on and headed to the bathroom where I stuffed my face into a towel and let loose.

I woke up with a start the following night, unsure if the moaning had been a dream this time. Grandma kept a flashlight next to a newspaper holder by her armchair. I grabbed it and headed down the hallway and pressed my ear against her door. A faint moan. It sounded like words. It sounded like: “Come in…”

I ran back to the sofa and spent the rest of the night under the covers, stifling any coughs and nearly pissing myself.

During the day, Grandma was as pleasant as ever. Warm, nurturing, down-to-earth. Day grandma was A-OK.

She placed my eggs on the table. Smelled great. I took my fork and poked at the yolks, which oozed out. I wondered if people’s eyes oozed like that after they died. I wondered if that night, I’d open the door and Grandma would be lying in bed with her eyes dripping into her ears, laughing at me.

My mom says after Grandpa died of a heart attack, I looked at her with a crooked smile, shrugged, and said, “No more Grandpa, I guess!” I hadn’t been around for his death. To me, he just disappeared. I remember feeling a pang of sadness, a twinge of confused panic that I shoved down into my child guts where it festered for years. I even pretended to cry at his wake by keeping my eyes open until they watered.

I kept the flashlight near the couch to brandish like a sword at every noise, as if the beam would cut through monsters and demons, through death itself.

I begged Mom to take me home but never said why. “Grandma can’t make that drive every day to watch you,” she told me. “Besides, Doctor Edgar says you’re responding well to these new antibiotics. You’ll come home soon.”

Some nights, I’d leave the flashlight pointed towards the hallway—a magical barrier, of sorts. I slept best those nights.

I started using my mom’s visits to gather information. Arm myself with knowledge about the other side. “Mom, where is Grandpa now? Mom, can Grandpa ever come back, and if he does, will he be a demon? When will Grandma die? Can dead people talk?” She’d mostly dismiss my questions, or give me the kinds of answers you give a child you’re trying to shelter from harsh realities. “Grandpa’s in heaven,” and all that. It reeked of bullshit, even then. I stuffed the bullshit down in my guts with everything else.

As I drifted into sleep, the moan came again.

I tumbled to the floor, grasping for the flashlight. I turned it on and shined it around the room, illuminating a framed photo of The Three Stooges, all of whom seemed to be watching me. Grandpa insisted on hanging it up years ago, and though Grandma always hated it, she never took it down.

My throat ached as I swallowed hard and grunted out a cough. I shined the light on the armchair. It’d molded to her body over time, so it looked as if her ghost sat in it.

When will Grandma die?

I shivered at the hallway entrance, shining light into the bathroom; the white ceramic tub reflected it back at me.

I’d once walked in without knocking and startled my grandpa as he took a bath. “You tryin’ to give me a heart attack, kid?” he’d said, laughing.

I worried that, each time the light flashed by, he’d be in the tub—smiling, wet skin oozing off his bones.

I crept to the bedroom door and pressed my ear against it.

Trembling, I turned the knob and pushed. The door creaked as it brushed against thick carpet. I covered the flashlight with my hand. The room went black. I separated my pointer and middle fingers to let a sliver of a beam escape. The beam passed over her dresser, where little piles of old jewelry covered letters, notes, and receipts. Behind them, a small vanity mirror stood like a portal to hell. A black and white portrait of unfamiliar relatives sat on her nightstand. They glared at me. I pointed the flashlight towards the bed. Grandma’s mouth hung open. Her curly, thinning hair surrounded her head like some demon insect hive. One of her arms rested on her chest over the blanket, and wrinkles cast deep shadows across her sagging skin. She looked like a primeval fossil on display. Unrecognizable.

I inched closer, angling the light off to the side. I watched to make sure her stomach moved up and down in the steady motion that sleep brings.

Fire rose in my throat. I pressed my lips together but the coughing fit wouldn’t stop. I stumbled backwards, covering my mouth. My leg banged into the dresser, rocking the jewelry and mirror. Grandma’s eyes shot open. I dropped to the floor, switched the light off. I thought her eyes were yellow but I couldn’t be sure. Swallowing back coughs that continued to fight their way out, I crawled towards the door.

Woke the dead, I thought, as a withered hand would surely grab my ankle at any second and drag me into some nightmare abyss.

I reached the hallway and gently closed the door.

I could hear sheets ruffling on the other side, then silence.

I stuck to the couch after that, no budging for anything.

About a week later, Mom took me home.

We saw grandma every Sunday for family dinners. Her house went back to normal, and she was as kind and loving as ever.

I stuffed the terror down into my guts.

Over time, I became a reluctant atheist, searching for signs, horrors, wonders, anything at all to ward off the fear of nonexistence.

Supernatural nightmares fermented into cold, hard, realistic anxieties. Anxieties that twisted themselves around any old person I saw. Old people didn’t come back as possessed demons. Old people died. We all die. There are no demons, no angels, no afterlife.

All that junk in my guts hadn’t diminished, but morphed into something just as bad. Worse, maybe.

Eventually, I found myself staring at Grandma’s rigid face during her wake. I wanted it to move. I wanted the eyes to spring open. I even wanted those words that terrified me as a child to creep out of her mouth.

She lay there, stiff.

When they closed her casket in preparation for the funeral, I asked for a moment alone. I listened. I thought someone whispered. A muffled whisper. My heart jumped. I pressed my ear against the cool, polished wood, but I only heard the ocean. 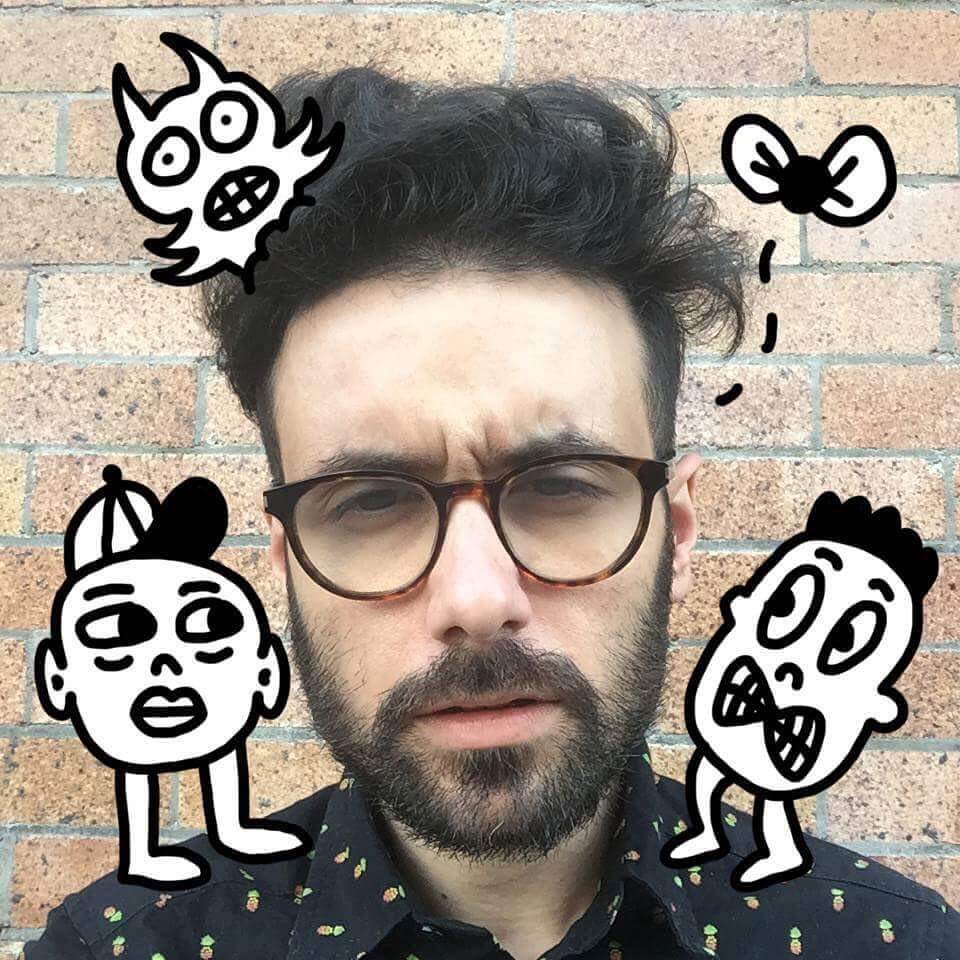 Michael Seymour Blake
Michael Seymour Blake’s work has appeared at Queen Mob’s, Fanzine, Flapperhouse, Entropy, Corium, Paper Darts, People Holding, and Reality Beach, among others, and he has work forthcoming from Hypertext. He has painted various murals around NYC, including one that was prominently featured at Silent Barn in Brooklyn, home to the new Mellow Pages Library. He lives in Queens.