Back in college, when the only jobs I had were work study, I witnessed an exchange that has come to represent that needling aspect of laboring in the service industry. The work abuses your body and spirit, but over time, like a piece of furniture is sun bleached for a while before you recognize the upholstered pattern has become weird. Day to day, however, punctuating the repetition, you have these brief experiences that make you consider self­-immolation.

I’m on the Upper East side at a neighborhood market, small like a bodega but a little nicer, like Citarella. A thin woman with hair as slick and straight as a sheet of black ice orders a sandwich. Her voice is clear, every syllable clicks into place. The spirited guy behind the counter with an outer­-borough accent, starts pulling ingredients together with a flourish it is hard not appreciate on a blustery February afternoon.

Once done, the guy unspools some waxy paper and places the sandwich in its center. The woman interjects, “Can you halve that?”

He pauses and leans over the case to hear her better and she repeats, “Can you halve that?” “Ha­hah,” he shakes his head, “this is a good sandwich, but I’m happy for you to have it.”

“No. No. Can you halve that?” She even pantomimes cutting the sandwich, crossing her right hand over her left in a carving motion.

They go back and forth like this until they’re both too frustrated to speak anymore. He shoves the sandwich in a bag and tosses it to another guy behind the cash register.

She couldn’t ask him to cut it in half and he couldn’t say, “I don’t understand what you’re saying.” And I get it. The mechanics of this exchange are so typical. Everyone has the muscle memory for it. Even if you’ve never been in his position, you could step behind the counter and mimic anyone who’s ever made you a sandwich. It will become clear before too long, however, that faking it is doing the job. It’s all rote. But that afternoon something broke down. The irony of a system of many trivial parts is that something as beastly and unwieldy as identity is always at stake for either player. So of course, the subtle difference in sound between have and halve would have two people ready to douse themselves in gasoline.

I’ll wager that she needed, needed like a strangling victim needs air, him to be familiar with the word “halve.” It’s accurate. She’s smart. Public schools are trash! He, for his part, needed her to cut the bullshit and speak up, speak normal! What are you trying to say, lady?
 
I checked the room to gauge other reactions. There were customers who beamed at the sight of that guy being flustered, while his co­workers expressed solidarity with him, rolling there eyes in her direction.

Wage labor work is a vast category. The universal of the service industry is negotiating personalities that would otherwise never coincide. The people you find clocking time at the mall, for example, are as varied as the people shopping there. And that dynamic remains even in the ecosystem of a ritzy, niche market boutique like the one where I sold fancy French perfume for two and a half years.

The rattle-bag of retail is also a place of compromised and mixed allegiances. You’re on the team, which gives you the pleasure of camaraderie and the boredom of a fixed role. It’s like summer camp— you’re bunk three and the customers are the jerks in bunk 10. You straighten your back and lock your jaw in high dudgeon against the emails that come in from Corporate. You bitch about your boss. The boss moans to you. When you get a customer who resembles the person you are out of uniform, you passively tell your colleagues to go fuck themselves because you’ve found a new best friend.

There is a way that retail, or any service work, itemizes you. You’re hired to facilitate the exchange of goods or services for money, but you are also selling yourself. Successful workers, the ones who net their store the most money in the fewest hours, are skilled at relating to people. Maybe they enjoy the work. Maybe they’re charged by competitive energy. To be sure, however, their colleagues who aren’t achieving as much are not all slackers or socially incompetent.

For an irregular schedule, low pay, and uncomfortable class dynamics in what is likely a life guided by any number of insecurities, there’s only so much a person can give of herself, especially now that we’re all culturally savvy and hyper­aware. The finger­-wagging that still goes on about ungrateful millennials or the laziness of the underclass has become an impotent gesture. We’re complex and can’t be defined by our work alone. There’s no authority, moral or otherwise, left to spin a life of servitude into something righteous. If only retail could be performed as a simple transaction. The customer wants something and you sell it. Then you part ways, both having had your expectations satisfied.

What plays out in reality, however, is that who you know yourself to be has to compete with what you involuntarily telegraph. This is true of life, but in service work, especially as a public interface, your life depends on a crude calculus. Your unique body and personality, otherwise wholly integrated and comprehensive, becomes disarticulated, like a portrait in exploded view. What you are conceptually— style, race, accent, etc. — is as pronounced as what you are materially in your height, your body type, your hair. Any of these elements is a target of bias, unconscious or well­-understood, anodyne or insidious. And like a lightning bug flash­-pattern, each type emits its own flare and attracts its own kind of scrutiny. One person will see me for the ballerina I was, ages ago. Another person will see my turquoise jewelry and assume I prefer earthy fragrances, Patchouli and Nag Champa. Workers do the same to customers. The familiarity of liberal arts accents, and twenty-something women in J Crew baubles are comforting on days I’ve helped one too many people who look like they left a yacht parked outside instead of a Honda.

Being a jerk is easier than meeting people for who they are and the mall is all about buying into types. You shop at any store in a mall and you’ve subscribed to a certain identity. The premise of the mall, much like the museum minus an educational mission, to dazzle, placate, and pacify persists into this century of technological sophistication and gritty populist movements. Somehow there are still enough people who are both bored and busy and need a space that presents the least amount of friction to amble around in in the shortest amount of time. They don’t want their self-image rankled anymore than they’d want to be bodily assaulted.

Wherever they can throw money around, they can stake a claim. A customer comes in and it’s just like she’s at home, but it’s nicer than where she lives so she’s more assertive and territorial, not wanting to lose a good thing. The loveliness is a reward for her taste. It is nice because she likes nice things, which makes her special and because she is special, things are nice. There’s no way that working for a customer like that will be a transactional experience.

We all contain multitudes, it’s just that sometimes what we find isn’t lyrical or poignant. But to be respected at my place of work I shouldn’t have to tell my life story, to situate myself in the narrative of the past­ recession over­educated poor that places like the New York Times love to write about. It’s should be more basic than that. I work in the store, yet the presumption is that I don’t know what we sell— selection of products, their varieties and qualities— and I don’t know what they’re made of and cannot speak to their efficacy or application. Granted, in a bygone era, places like bookstores were run by voracious readers who could, with little persuasion, discourse on a bazillion titles and you’d go home with five more books than you’d intended to buy. That’s over. Maybe today’s shopper presumes that such is the new corporate model that sales associates are more like security guards, just there to keep an eye on things.

It will be awhile before hoards of us are unable to find employment at all because, you know, robots. And no one should hold her breath for universal basic income. What will it take in the meantime, with all that we know about the costs and precariousness of living, knowing that in 2015 58.5% of wage and salary workers were paid by the hour at or below minimum wage, to abandon the delusion that buying heaps of fast­-fashion or ­food confers prestige on the spender.

Money is crude not magical. It built then destabilized the world of Western art. If an upstart like Kanye can make it, who really cares about pedigree? It generates more think­-pieces for reality tv than for any auteur. If a customer wants a bottle of perfume, do I really have to play her ladies maid? 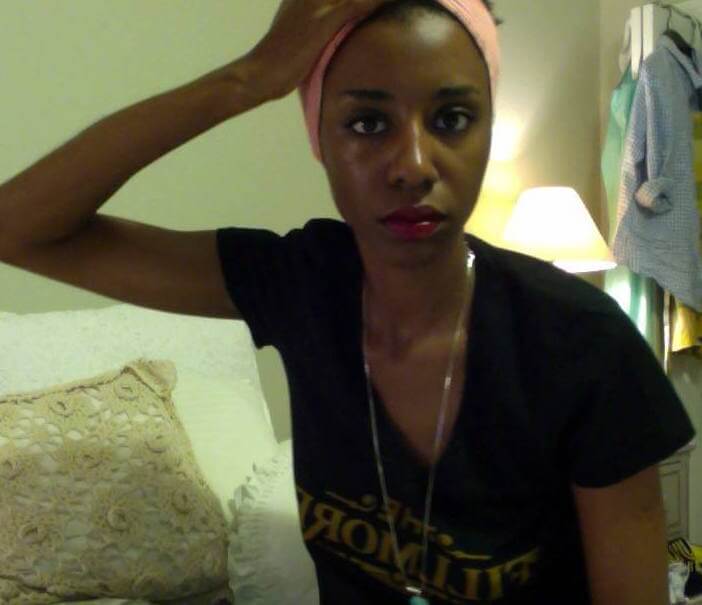 Jhari Derr-Hill
Jhari is a writer living and working in Raleigh, NC. She has an MA in art history from Williams College, but hasn't been inside a museum for three years. She writes about retail work and depression, respectively, in fiction and personal essays for how humor-filled and grim they are.