Check out an excerpt of William Boyle’s second novel THE LONELY WITNESS, out now from Pegasus Books!

When a young woman with a sordid past witnesses a murder, she finds herself fascinated by the killer and decides to track him down herself.

Excerpt from The Lonely Witness
by William Boyle

When the reality of what’s happened kicks in, Amy begins to shake with fear. She feels like a killer with the knife in her pocket. She’s not sure she should go home. And how can she ever go back to church? She’s sure she’ll see Vincent there on the altar, his hands at his neck, his blood pouring down the marble steps. She’s sure that Katrya’s organ will mimic his choking. She’s sure she’ll smell that rubber and distress when she takes the communion wafer on her tongue. She’s sure she’ll see his blood in the chalice and taste it on her lips. And in the stained glass windows, as she kneels to light a candle, Vincent will appear. Murdered like a saint, after all. And she, in that moment, his last, mistaking herself for a saint.

She’s walking wherever. Hand in her pocket over the knife. Blood on her hand. Spots of blood on the tips of her sneakers, where she must’ve edged against the puddle of blood when she reached out to put her hand on Vin­cent’s chest or when she picked up the knife.

She’d wandered left on Kings Highway, away from Homestretch, to Seventy-Eighth Street, past Bay Parkway, all the numbered avenues running down. Seventy-Eighth Street looks more or less like the street where Vincent was stabbed, like all the side streets in the neighborhood. Trees. Fire hydrants. Iron front gates. Mary statues in the yard. Garbage cans at the curb. Tight parking. Dull bloom of streetlamps. Cars rattling up the block every so often, their lights a disaster of possibilities. As she passes through Bensonhurst, headed for Dyker Heights, row houses give way to larger two- and three-family houses with private driveways. When Amy looks up and realizes she’s about to cross Sixteenth Avenue, she remembers the Roulette Diner.

The Roulette’s on Sixteenth and Eighty-Sixth. It’s an old dive of a diner that Alessandra took her to a handful of times, open twenty-four hours. She makes a left and hustles the eight short blocks.

When she gets there, she walks up the crumbling stoop. A laminated sign on the door reads the roulette will be closing on april 15, 2017. thank you patrons for 44 great years! Amy opens the door. A bell clangs. It very much looks like a place at the end of its run: Naugahyde booths patched with duct tape, mirrored walls dirty and cracked. What once must’ve felt casino-flashy now feels casino-sad. Waiters and waitresses in black vests and button-up shirts look like they’ve been working at a low-stakes blackjack table all night. An old man is huddled at the front register with a Daily News, glasses low on his nose.

Amy settles into a booth overlooking the parking lot, taking her hood off. Half the parking lot is torn up by some purposeless construction. A few other people sit scattered around at tables and booths. It must be late, but not that late. She’s afraid to look at her phone. A couple of giggly girls across from her are taking selfies of themselves with two big plates of disco fries. Amy remembers Alessandra ordering the disco fries.

A waiter comes over, long nails and tired eyes with a crusty green stain on his vest. He hands her a sticky menu and fills her water glass. The glass has a white film of dishwasher residue on it. She thanks him and orders a coffee.

She gets up and walks to the bathroom. It’s nasty in there. Pink foam from the broken soap dispenser has left a trail around the sink. Another broken mirror. Broken tiles on the floor. There are two stalls, each with graf­fiti on the outside of the door—tags, phone numbers, half-peeled stickers. She washes the blood off her hand before doing anything else.

In one of the stalls, she spreads toilet paper on the seat and sits down to pee. She looks at the tattoos on her thighs. Used to be her favorite pieces. Mexican sugar skulls, bright and cheerful fraternal twins. One good, one evil. Done in Flushing by Joey Assassin. It seems fitting to focus on them now, thinking about the joy and purpose she felt watching Vincent die.

She unspools some toilet paper and wipes the blood from her sneakers. She drops the crumpled paper between her legs into the water. She takes the knife out of her pocket and unfolds it. She pictures it lodged in Vincent’s throat, hears him gurgle around it. She sees the killer’s profile. The blood is there. It’s real. The knife is real. Her legs are falling asleep. She wipes the blood from the knife with a ribbony heap of toilet paper and stands up. She deposits the bloody paper into the toilet and flushes hard, as if it will be rejected if she hits the handle too softly. Red swirls in the water.

She sets the knife on the toilet tank and pulls up her pants. She wants to clean the blood from the knife, but she’s afraid to do it at the sink. What if someone walks in? She dips the blade in the fresh toilet water and pushes it around, like she’s doing dishes in a basin. More red in the water. She turns it over in her hand and holds it by the blade and washes the handle that way. When she’s done, she dries the knife with more toilet paper and then gives the toilet another forceful flush. She closes the knife and puts it back in her pocket.

She’s not going to have a mirror moment. She rinses her hands in the sink and avoids looking at herself in the broken glass, as she did on the way in. She’s not sure what or who she’ll see reflected in the grime. 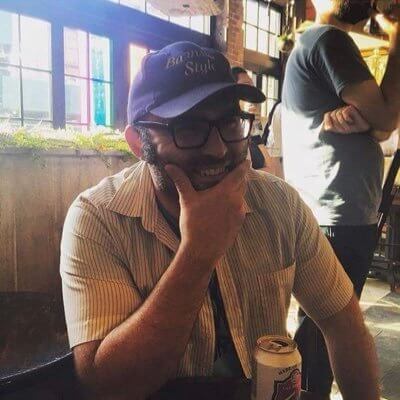 William Boyle
William Boyle is from Brooklyn, New York. His debut novel, Gravesend, was published as #1,000 in the Rivages/Noir collection in France, where it was shortlisted for the Prix Polar SNCF 2017 and nominated for the Grand Prix de Littérature Policière.