In the recent episode of The Talking Book Podcast, we played an excerpt of Clarice Lispector’s The Passion According to GH. Here is the piece read by the talented Sofia Willingham (who also narrated Anaïs Nin with us back in the day). Thanks so much to our pal Chris Wait at New Directions, and the narrator for making this one so darn beautiful. Get the full audiobook here…

It was then — it was then that as if from a tube the matter began slowly oozing out of the roach that had been crushed.

The roach’s matter, which was its insides, the thick, whitish and slow matter, was coming out as from a tube of toothpaste.

Before my nauseated and seduced eyes, the shape of the roach began slowly modifying as it swelled outward. The white matter slowly spilled atop its back like a burden. Immobilized, it was bearing atop its dusty flanks the weight of its own body.

“Scream,” I calmly ordered myself. “Scream,” I repeated uselessly with a sigh of deep quietude.
The white thickness had halted atop its scales. I looked at the ceiling, briefly resting the eyes that I felt had become deep and large.

But if I screamed even once, I might never again be able to stop. If I screamed nobody could ever help me again; whereas, if I never revealed my neediness, I wouldn’t scare anybody and they would help me unawares; but only if I didn’t scare anybody by venturing outside the rules. But if they find out, they’ll be scared, we who keep the scream as an inviolable secret. If I raised the alarm at being alive, voiceless and hard they would drag me away since they drag away those who depart the possible world, the exceptional being is dragged away, the screaming being.

— Because, hand that sustains me, because I, in a trial I never want again, in a trial for which I ask pardon for myself, I was exiting my world and entering the world.
Because I was no longer seeing myself, I was simply seeing. A whole civilization that had sprung up, with the guarantee that what one sees be mixed immediately with what one feels, an entire civilization whose special role is to depart it: a scientist is given leave, a priest is given permission. But not a woman who doesn’t even have the guarantees of a title. And I was fleeing, uneasily I was fleeing.

— Because, you see, I knew I was entering the crude and raw glory of nature. Seduced, I was still fighting as best I could against the quicksand that was swallowing me: and each movement I was making toward “no, no!”, each movement pushed me inevitably on; not having the strength to fight was my only forgiveness.

I looked around the room where I’d imprisoned myself, and sought an exit, desperately trying to escape, and inside me I had already shrunk so much that my soul was against the wall — not even able to stop, no longer wanting to stop, fascinated by the certainty of the magnet that was drawing me, I shrank into myself up to the wall where I was implanted in the drawing of the woman. I had shrunk into the marrow of my bones, my last refuge. Where, on the wall, I was so naked that I had no shadow.

And the measurements, the measurements were still the same, I could feel they were, I knew I’d never been more than that woman on the wall, I was she. And I was well preserved, a long and fruitful path.

My tension suddenly snapped like a noise interrupted. And the first true silence began to whisper. Whatever I’d seen that was so calm and vast and foreign in my dark and smiling photographs — whatever that was was outside for the first time and entirely within my reach, incomprehensible but within my reach.

Which was giving me relief as a thirst is relieved, it was relieving me as if my whole life I’d been waiting for a water as necessary for my bristling body as cocaine is for a body that demands it. Finally the body, soaked with silence, was calming down. The relief came from my fitting into the mute drawing in the cave.

Until that moment I hadn’t wholly perceived my struggle, that’s how buried I was in it. But now, from the silence into which I had finally fallen, I knew I’d struggled, that I had succumbed and surrendered.

And that, now, I really was in the room.

The narrow route passed through the difficult cockroach, and I’d squeezed with disgust through that body of scales and mud. And I’d ended up, I too completely filthy, emerging through the cockroach into my past that was my continuous present and my continuous future — and that today and always is on the wall, and my fifteen million daughters, from then up to myself, were there too. My life was as continuous as death. Life is so continuous that we divide it into stages, and we call one of them death. I had always been in life, and it matters little that it wasn’t I properly speaking, not what I’d usually call I. I was always in life.

I, neutral cockroach body, I with a life that at last doesn’t escape me because I finally see it outside of myself — I am the roach, I am my leg, I am my hair, I am the section of whitest light on the plaster of the wall — I am every hellish piece of me — life in me is so demanding that if they hacked me up, like a lizard, the pieces would keep trembling and squirming. I am the silence engraved on a wall, and the oldest butterfly flutters and finds me: the same as always. From birth to death is when I call myself human, and shall never actually die.

But that isn’t eternity, it’s damnation.

How luxurious this silence is. It’s built up of centuries. It’s a silence of a roach that’s looking. The world looks at itself in me. Everything looks at everything, everything lives the other; in this desert things know things. Things know things so much that that’s . . . that’s what I’ll call forgiveness, if I want to save myself in the human world. It’s forgiveness itself. Forgiveness is an attribute of living matter. 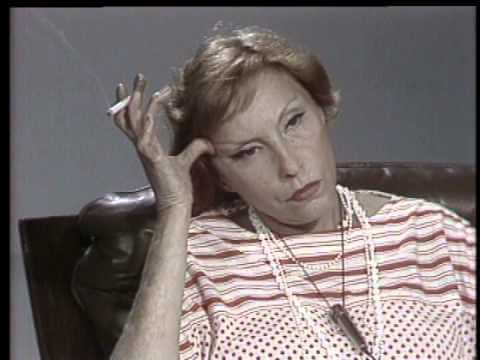 Clarice Lispector
Clarice Lispector (December 10, 1920 – December 9, 1977) was a Brazilian writer acclaimed internationally for her innovative novels and short stories. Born to a Jewish family in Podolia in Western Ukraine, as an infant she moved to Brazil with her family, amidst the disasters engulfing her native land following the First World War.